Four decades after being named among the first National Cancer Institute–designated Cancer Centers in Southern California, Sanford Burnham Prebys is not only a powerhouse of scientific discovery but is also known far and wide for its innovation, impactful research advances and esteemed community standing.

A decade before its Cancer Center designation, in 1971, the Institute’s beginnings were jump-started by the passage of the National Cancer Act. The nationwide boost in cancer research funding from the Act sent the Sanford Burnham Prebys founders on their journey to San Diego after they received what was, at the time, a significant research grant.

“The story of this Institute is not only amazing, but it’s one of a kind. In 1976, Dr. and Mrs. William Fishman—both age 62 at the time—drove out in the family car [from Tufts University in Massachusetts] with all of their possessions, rented a two-bedroom apartment and put their laboratory in a spare room and called it the La Jolla Cancer Research Foundation,” says Malin Burnham, a major benefactor and donor whose name is also now part of the Institute in recognition of his generous contributions. 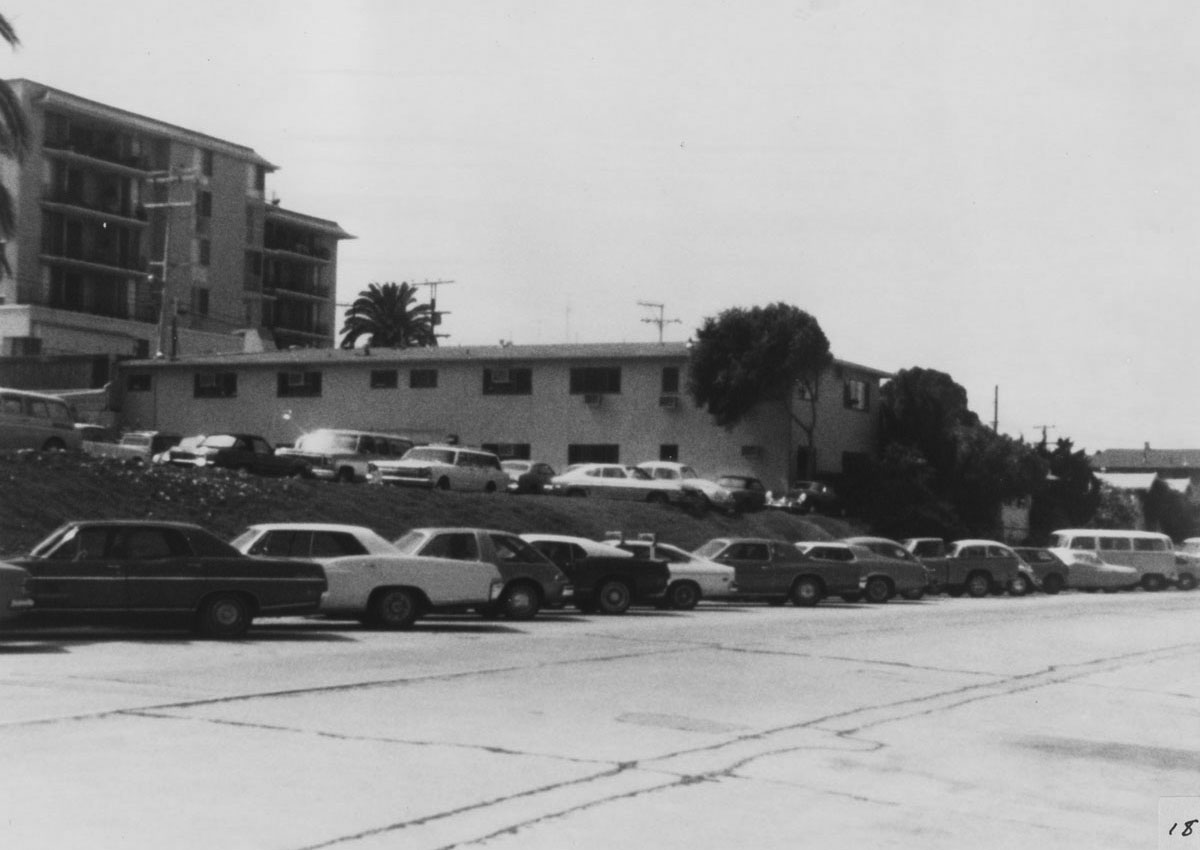 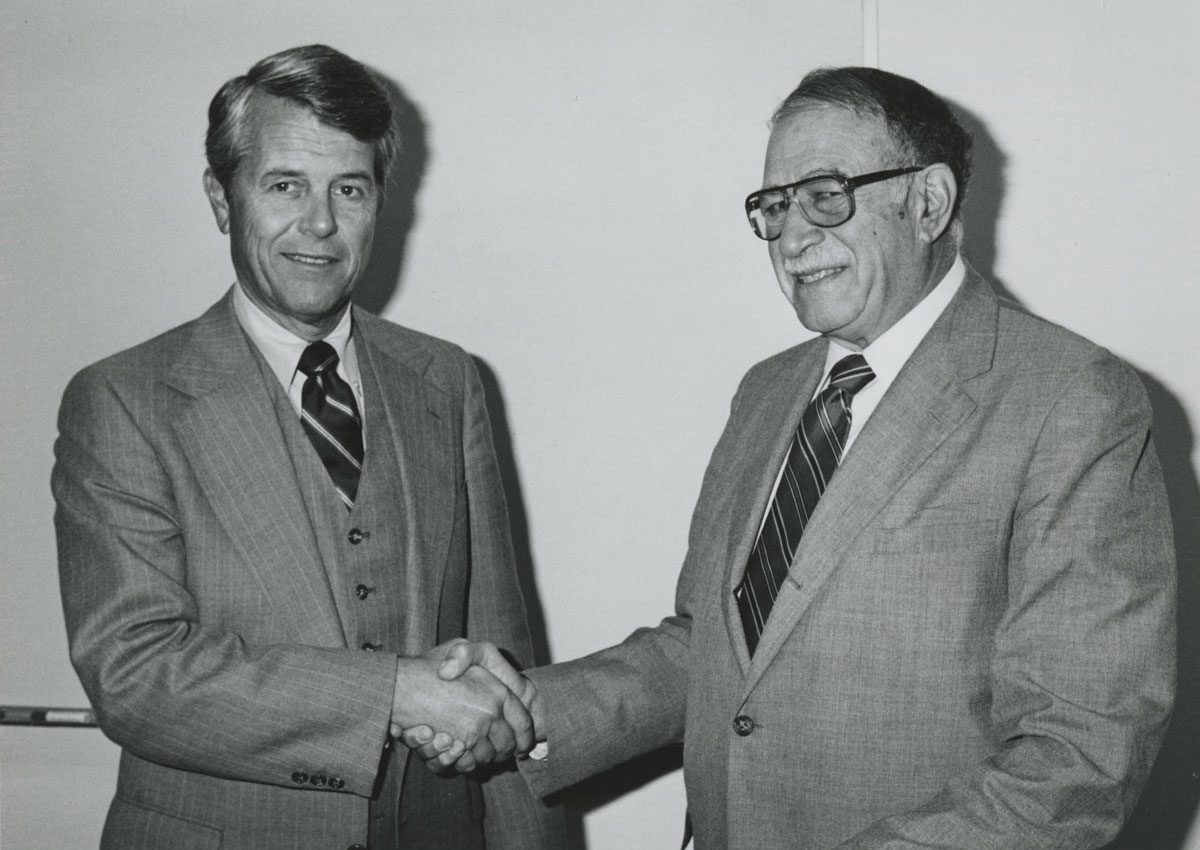 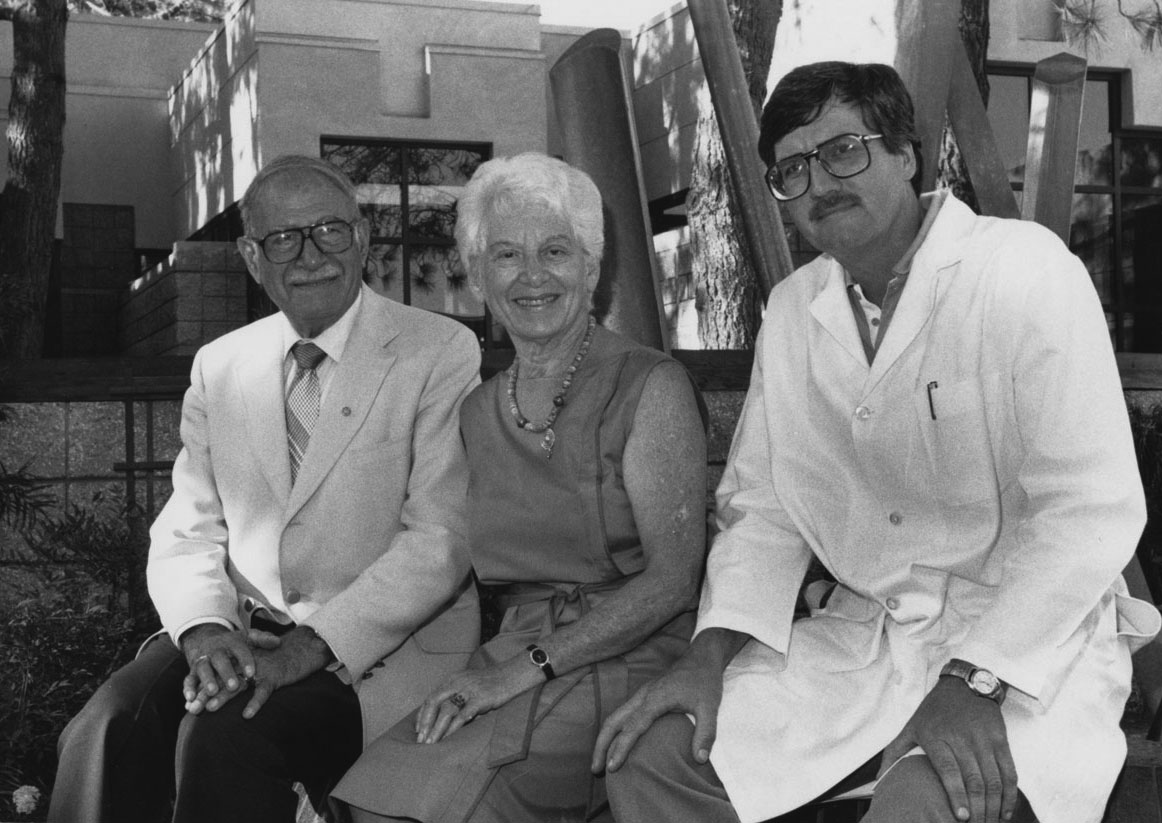 It took only a few years to see some significant discoveries come out of the Institute, including a few by one of its earliest scientific stars, Erkki Ruoslahti, M.D., Ph.D., Distinguished Professor Emeritus, who was recruited to the Institute in 1979 by the Fishmans. In 1984, he discovered a key cell-adhesion regulator, RGD—a versatile biological system that is now relevant in the fields of oncology, tissue engineering and regenerative medicine. A few years after that came a collaborative discovery of the role TGF-beta plays in fibrotic diseases affecting organs such as the liver, kidneys, lungs and skin.

“I’ve spent the best part of my life with the Institute, building it up. It was an incredible experience to be able to do that. From a handful of people, we grew to a major institution. I consider it partly my baby, and I’m very attached to it,” says Ruoslahti.

By 1991, the results of the founders’ efforts and the Cancer Center designation paid off in a very demonstrable way when, on a national level, the overall cancer death rate—which had been creeping upward—made a decided turn and started to drop. Subsequently, mortality rates have fallen about 1% per year for the past 30 years. The continuing fall in death rates has occurred in large part because of breakthrough research at Cancer Centers such as Sanford Burnham Prebys.

The start of the new millennium in 2001 brought even more progress as the Institute continued a shift from being a specialized center focusing on cancer to one investigating a larger number of diseases.

“We needed to think about new frontiers, as we knew that there are a lot of layers and complexity to how cells work, how organs work and how the body works,” notes John C. Reed, M.D., Ph.D., president and CEO of the Institute from 2002 to 2013. “It was an exciting time, particularly when you think about some of the advances in genome editing that allowed us to change a single letter in the alphabet of the genome of a living cell, and how that could correct a mutation.”

In 2005, leaders at Sanford Burnham Prebys launched a broad educational mission to support the goal of recruiting and educating some of the most prominent young scientists in the world. Established under the leadership of Guy Salvesen, Ph.D., now dean of the Graduate School of Biomedical Sciences and a professor in the Cell and Molecular Biology of Cancer Program at Sanford Burnham Prebys, the Graduate School of Biomedical Sciences offered a Ph.D. degree in biomedical sciences and subsequently achieved accreditation with the Western Association of Schools and Colleges. Fifteen years hence, more than 50 students have graduated from the program, and the Institute employs more than 100 postdoctoral researchers who are immersed in education and training.

“We wanted to educate future scientists in an innovative way that other institutions were not doing,” says Salvesen. “It has been very exciting developing new [academic] ideas—it’s rejuvenating. Also, it’s great to interact with students, and it’s just a lot of fun.” 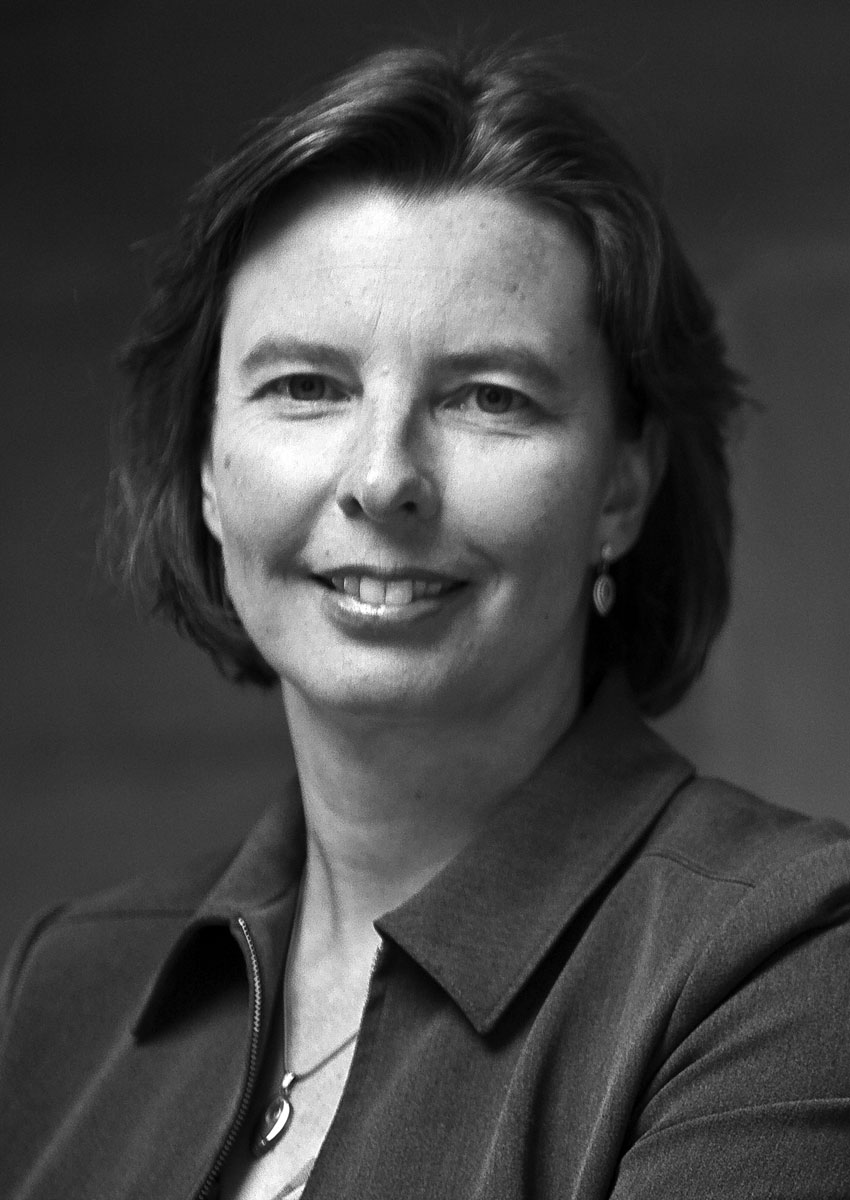 By the early 2010s, the Institute accelerated its strategic plan to extend its efforts in the translational research realm. This corresponded with expanding the Institute’s focus into many new areas such as diabetes, brain, infectious, inflammatory and children’s diseases. More formative partnerships with San Diego pharmaceutical companies also ensued with the purchase of specialized equipment and dedicated facilities to help companies take basic discoveries and turn them into practical therapies that could be used to improve human health. To this end, the Institute developed what is now one of the largest drug-screening platforms in the nonprofit world.

“Sanford Burnham Prebys today is unique in the way that we combine world-class capabilities in fundamental laboratory research with translational research capabilities. Our Institute has evolved so much while I’ve been here that I can keep gaining new experiences—there isn’t a better place to be a scientist,” says Kristiina Vuori, M.D., Ph.D., president of the Institute since 2010 and Pauline and Stanley Foster Presidential Chair and professor in the Aging, Cancer and Immuno-oncology Program. “What is key is that we want to enable our scientists to think and move beyond the test tube. This is certainly also true in my own research on cell adhesion, which plays an important role in the most life-threatening aspect of cancer: metastasis.”

As of today, the Institute’s name is Sanford Burnham Prebys thanks to substantial contributions from Malin Burnham, T. Denny Sanford and Conrad Prebys. There are more than 500 research staff members working tirelessly in the Institute’s laboratories, including postdoctoral researchers. The Institute now holds more than 1,000 patents and has partnered with more than 35 start-up companies to advance their discovery and development processes.

In January of 2021, Ze’ev Ronai, Ph.D., became the newly appointed director of the NCI-designated Cancer Center at Sanford Burnham Prebys. A few years earlier, he received the Lifetime Achievement Award from the Society for Melanoma Research. “I’m honored to be named director of our outstanding Cancer Center,” says Ronai, who is also a Jeanne and Gary Herberger Leadership Chair in Cancer Research and a professor in the Aging, Cancer and Immuno-oncology Program.

“With the exceptional scientists at Sanford Burnham Prebys, who have a reputation for cutting-edge cancer research, there are limitless possibilities as to what we can accomplish together.” 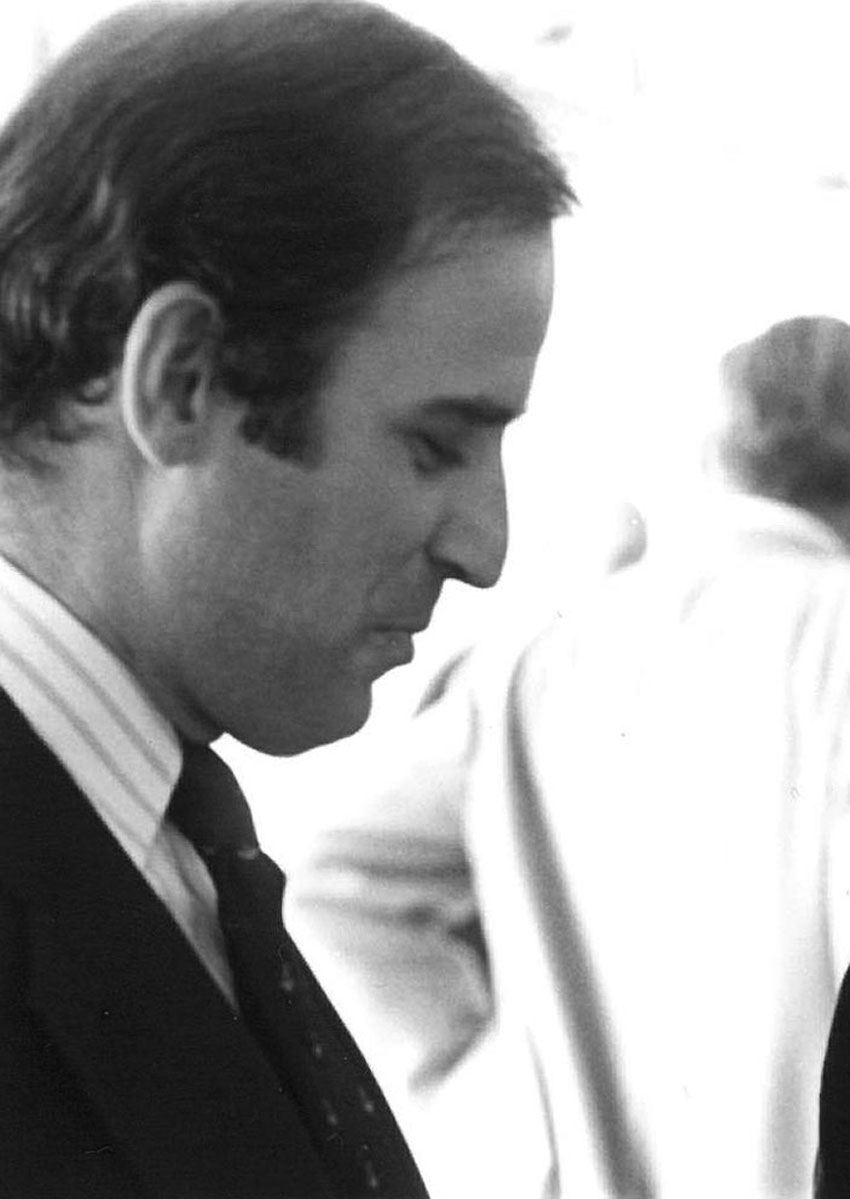 President Joseph R. Biden visiting the Institute when he was a Senator.

Looking back—and to the future

Then–Senator and now–President Joseph R. Biden visited the Institute as part of the formal naming when it received its NCI designation in 1981. Fighting cancer became a truly personal mission for him when his son Beau died from a very aggressive form of brain cancer in 2015. Shortly after his son’s death, Biden oversaw the Cancer Moonshot, an initiative aimed at speeding development of cancer treatments. More than $1 billion has been invested in the initiative as of 2021, supporting more than 240 research projects and 70 cancer initiatives, a number of which have benefited Sanford Burnham Prebys.

invested in the Cancer Moonshot initiative as of 2021

“We can make significant strides fighting cancer and Alzheimer’s and other diseases,” Biden said at the time. “I think we’re on the cusp of some real breakthroughs across the board on cancer.”

Indeed, those words sum up quite nicely the “state of the science” at Sanford Burnham Prebys and the Institute’s potential for making a significant, continuing impact on people’s lives worldwide.

Learn more about our story.