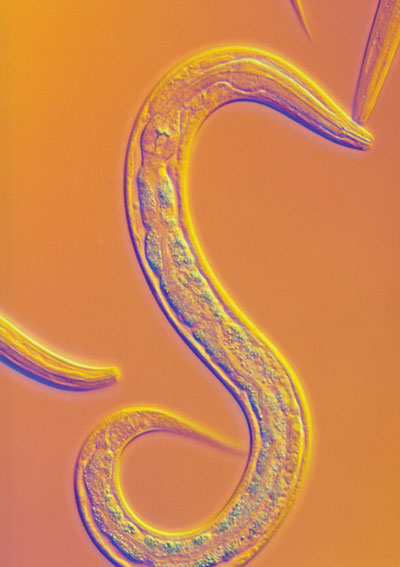 Growing up in Denmark, Hansen’s interest in science stemmed from a penchant for exploring the inner makeup of things. She eagerly cut open a fruit fly, for example, just to see how it worked.

Studying C. elegans has benefits. Because it’s transparent, researchers can see inside its organs while it’s alive. That trait and its short life span make the nematode an ideal model for studying the process at the center of Hansen’s research: autophagy (pronounced ah-TOF-a-gee).

Autophagy is the way that cells remove old or broken cellular materials, and then recycle them into new molecules or energy. Essentially, the cell builds a “trash bag” from pieces of membrane and puts damaged parts in the bag. Tiny vesicles—now fluid-filled sacs of trash—are then transported to a “recycle plant,” a sealed-off compartment in the cell where powerful enzymes degrade the unneeded material.

"With a little bit of genetic tinkering, we can improve the autophagy process and help extend the life span of these worms."

It’s a remarkable process that’s gaining increasing scientific attention. (It was the subject of the 2016 Nobel Prize.) One reason: Several age-related diseases, including Alzheimer’s, Parkinson’s and cancer, have been linked to defective autophagy.

In diseases like Alzheimer’s, proteins start to clump up and aggregate and become toxic,” Hansen explains. “Normally, autophagy clears those out. So does autophagy fail because you accumulate too many of these aggregates, and the system gets constipated? Or do the proteins clump up because autophagy fails? We really don’t know.”

She first made that direct link as a postdoc at UC San Francisco. Since coming to SBP in 2007, her lab has examined multiple longevity paradigms and shown that food-restricted C. elegans seem to have higher-than- normal rates of autophagy, and longer life spans.

Her team is now studying how dietary restriction boosts autophagy, as well as how the process weakens with age. Because, like most things, autophagy declines over time.

“Maybe there’s too little membrane to build the trash bag,” Hansen says. “Or the roads they travel on—and there are all kind of roads inside cells, believe it or not—start to have potholes. Or maybe the trash reaches the plant, but the plant can’t degrade the components.”

She cautions against just blindly boosting autophagy to increase longevity: “If you boost it at the wrong time or the wrong place, you may eat up something that normally should not be eaten.”

One other caveat? Even the long-lived worms die. “I don’t see this as a fountain of youth,” she adds. “It’s about understanding the fundamental mechanisms that underlie many age-related diseases, which could have huge implications for treating those diseases.”

As much as Hansen enjoys peering inside a cell—“It’s a huge room; it’s amazing what’s in there”—science is not her only love. At least three times a week, she heads to the beach to play volleyball.

“I’ve played competitive team sports my whole life,” she says. “It’s really taught me how team members play different roles— and that applies in the lab as well.”

She’s particularly passionate about mentoring other researchers, and she received the 2017 Mentor of the Year Award from the National Postdoc Association.

Indeed, that’s another element that was missing from her childhood drawing: a team.

“Science is a very collaborative event,” Hansen says. “I work with a great group of people that I also have the good fortune to mentor. I find it very rewarding to empower others and to build strong teams.” 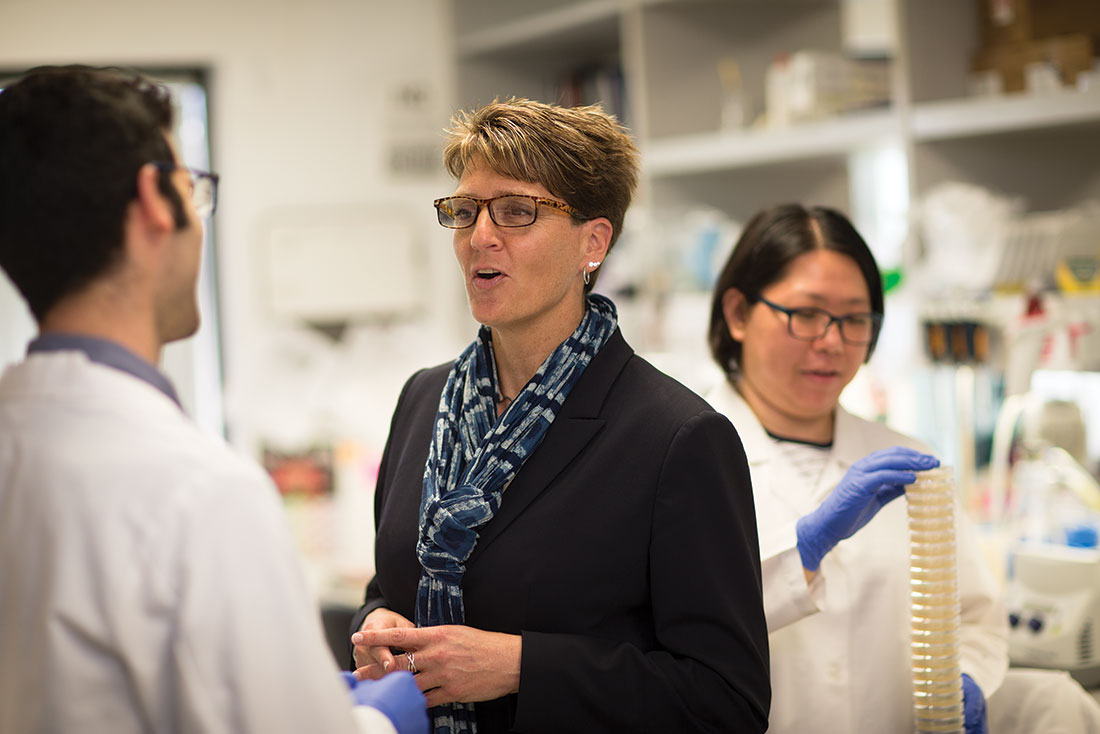