With a scientific mind and an artistic eye, Dr. Francesca Marassi is uncovering the form—and function—of infection and immunity.

Marassi is contemplating the 3-D, multicolored image she’s just pulled up on her computer screen. The intersecting strands of red, blue, green and gold—with a purple, pearl-sized ball in the center—look a bit like a spider’s web. Or even, when viewed from another angle, like an alien, jellyfish-like creature.

What it really is, though, is a protein called vitronectin—and it’s Marassi’s pride and joy. Earlier this year, she and her team were the first to discover what that protein looks like, mapping out how its 459 amino acids fold together in intricate molecular detail to form the image now on her screen.

That’s important because vitronectin, found in abundance in blood, plays a key role in the innate immune system—your body’s first line of defense against invading pathogens. In fact, one of the deadliest pathogens in history—the bacterium that causes plague—attacks vitronectin as soon as it invades.

“It hijacks it and then degrades it,” explains Marassi, a professor in the NCI-designated Cancer Center at Sanford Burnham Prebys. “And that takes away this key component of the innate immune system, so it can’t fight the infection.”

A lock and key

The bacterium that causes plague—which killed up to 60 percent of Europe’s population in the 1300s—is called Yersinia pestis (Y. pestis), and it takes center stage in Marassi’s lab.

Y. pestis is highly virulent, and while it can be treated with antibiotics, the U.S. government has classified it as a Category A bioterrorism agent—something that could be used to threaten public health or national security.

That’s reason enough to study it, but Marassi is most interested in it as a model for how pathogens interact with the human immune system. Numerous bacteria, for example, hijack vitronectin. Studying the pathways Y. pestis uses can open up novel ways of treating other bacteria, too—a critical task in an era of growing antibiotic resistance.

To do that, though, scientists first have to understand what these proteins look like at a molecular level.

“Proteins are not just strings of amino acids; they also fold together into different shapes,” Marassi explains. “And those shapes are really important for their function.”

To determine those structures, she and her team use nuclear magnetic resonance (NMR) spectroscopy, an MRI-like technology that helps them peer inside proteins. Recently, they’ve identified not only the structure of vitronectin but also the structure of a Y. pestis protein that attacks vitronectin.

Now, the team is mapping the interaction that occurs between those two proteins, as well as other interactions in the immune system.

“If you can see the molecular picture of what’s happening, in detail, then you can design a drug that targets that,” she says. “It’s like a lock and key.”

Originally from the small city of Mantua, Italy, Marassi moved to Toronto, Canada, with her family when she was 12.

“I loved to draw and paint, but I also loved math and chemistry and physics,” she says of her childhood. “I was always in between the two worlds.”

Structural biology—with its emphasis on shapes, patterns and symmetries—turned out to be a perfect fit. After earning her Ph.D. in chemistry from the University of Toronto, she did a postdoc at the University of Pennsylvania and then joined the structural biology division at the Wistar Institute in Philadelphia, part of the Penn campus. She came to Sanford Burnham Prebys in 2000. 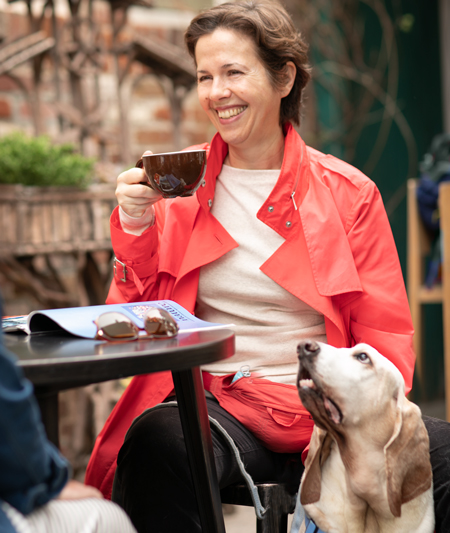 “Having the freedom to pursue your ideas is the most important thing, and that’s what I have here,” she says.

Outside of her lab, she likes to hike and spend time with her husband (a biochemist) and their dog. And, of course, draw.

Recently, she’s shared some of her artistic side with her colleagues—sketching a pencil drawing for some campus posters, and creating computer-generated, stylized images of various scientific discoveries at the Institute. The images were made into a mural just around the corner from her office.

And while Marassi doesn’t call herself an artist, she notes that the two worlds share some commonalities.

“There’s something to this process of just getting lost in a project that you can experience with science, with art, with writing, with any sort of activity that engages your imaginative side,” she says. “That’s what attracts me to what I do.”

That, and the joy of discovering both form and function in a beautiful, symmetrical protein.

“The rewarding part is being able to make a contribution to biology,” she notes, then smiles.
“The really fun part is doing it.”