Dr. Jerold Chun is getting to the bottom of Alzheimer’s disease one neuron at time

The human brain is an enormously intricate mosaic. With mosaics, you have to assemble the pieces one at a time to see the big picture,” says Jerold Chun, M.D., Ph.D., professor and senior vice president of Sanford Burnham Prebys Neuroscience Drug Discovery Program. “By understanding these brain pieces—single neurons—we will see the bigger picture of the brain, its diseases and how to treat them.”

Chun, a pioneer in neuroscience, recently joined our Institute, bringing his 25-member research team with him from The Scripps Research Institute. The diligent and bright young students and postdocs specialize in genomic mosaicism, the DNA differences among cells of our brain and body.

“People used to think that each cell in the body had the exact same genetic makeup—23 pairs of chromosomes, identical copies of genes and DNA sequences,” Chun explains. “But with modern technology to analyze single- cell genomes, we now realize that cells from the same person can actually have different genomes, creating a genomic mosaic.”

“It’s worth noting that DNA variation in the brain is not all bad. It may also account for why human behavior can vary so widely, from genius to madness.”

Chun’s lab was the first to show that cells with altered DNA content that includes more or less than two copies of each chromosome—aneuploid cells—are found in the brain. Before then, DNA was thought to be identical in every brain cell.

“In the brain, each neuron is unique, which contributes to the overall picture of how this remarkable organ controls our thoughts and all of our body’s functions,” says Chun.

“Genomic mosaicism actually starts before birth,” Chun explains. “When a brain is forming in the womb, cells develop, divide and copy chromosomes rapidly. Each cell should have an identical set of chromosomes, packaging thousands of genes. But sometimes chromosomes aren’t evenly distributed or completely copied when cells divide, causing aneuploidy, as well as other genomic changes.”

His team was also the first to show that the brains of Alzheimer’s patients have altered genomic mosaicism compared to brains without the disease. Alzheimer’s neurons can further have more copies of a disease-causing gene called amyloid precursor protein (APP). APP is the starting point of amyloid plaques, hard clumps of protein that disrupt brain cell communications and a prominent feature of Alzheimer’s disease. Drugs that eliminate or prevent amyloid plaques are a major focus of current experimental treatments.

“Less than 1 percent of all cases of Alzheimer’s disease are ‘familial’—or inherited,” explains Chun. Most cases are described as “sporadic,” which means that there is not a specific family link, but a complex combination of things that include our environment, lifestyle, genes and genomic mosaicism. “It turns out that for almost all neuropsychiatric diseases out there, the most common form is sporadic, so we think our research approach will apply to other diseases as well.”

DNA changes in the brain can’t be detected by swabbing cells from the inside of your mouth, or taking a blood sample. According to Chun, “The only way we can really get to the bottom of the disease is by understanding the brain itself, down to the level of single neurons. My lab’s goal is to pursue and translate this fundamental research into actual therapeutics for Alzheimer’s, as well as other brain diseases.”

As the disease progresses, the branched projections of a neuron, called “dendrites,” degenerate and cause neurons to atrophy. When neurons are no longer able to function, patients suffer increased memory loss and personality changes. 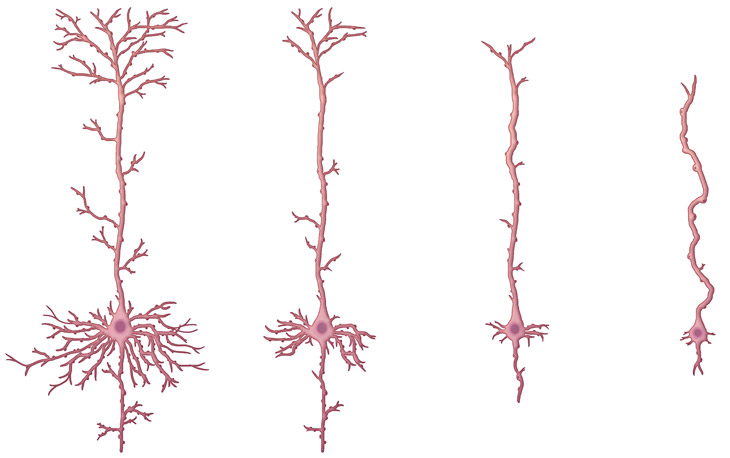 Moving to the Institute

Translational neuroscience is what brought Chun to Sanford Burnham Prebys. “New therapies are desperately needed for patients with brain disorders,” says Chun. “Today patients can only receive treatment for their symptoms without really impacting disease.”

In conversations with the Institute’s CEO, Perry Nisen, M.D., Ph.D., Chun says they “both felt an urgency to move—or translate— basic lab discoveries into new medicines. We share a passion for finding new drugs that prevent, slow and perhaps even one day cure challenging and medically important diseases like Alzheimer’s.

"The path to new brain drugs is not an easy one...The process is really more of a marathon than a sprint."

“Working with the Conrad Prebys Center for Chemical Genomics at the Institute—one of the most sophisticated drug discovery facilities in academia—gives my lab a better chance to turn our scientific discoveries into effective therapeutics,” says Chun.

Chun is no stranger to finding paths to new drugs. His lab identified the first lysophospholipid (LP) receptor, leading to an entire field of study that has subsequently enabled the development of novel drugs including fingolimod (Gilenya®), the first oral drug to treat multiple sclerosis. His team’s LP research also has relevance to other neurological disorders such as stroke and hydrocephalus.

“The path to new brain drugs is not an easy one,” says Chun. “Some steps take us forward, and some don’t. But even perceived setbacks add to our understanding of what we need to do to make an effective drug. The process is really more of a marathon than a sprint.”

Chun knows something about marathons, having completed his 44th consecutive Honolulu Marathon last year, as well as an earlier Boston Marathon. Born in Philadelphia and raised in Hawaii, he attended Stanford University, where he completed his M.D./Ph.D. in neurosciences followed by postdoctoral studies at MIT. Since then, he has held both academic professorships and management positions in industry.

And now his journey continues at Sanford Burnham Prebys.

A PET scan (a form of 3-D imaging) reveals regions of the brain showing darkened areas representative of the lack of neural activity.