As a surfer, Dr. Carl Ware rides on the surface of the sea. In the lab, he does a deeper dive—into the ebb and flow of the immune system.

The ocean, every surfer knows, can be both friend and foe. Time a wave just right, and you can take a joy ride along the crest of paradise. One wrong move, though, and that beautiful breaker will toss you into a tumbling, humbling wipeout.

A lifelong surfer, Carl Ware, Ph.D., experiences those two sides of the ocean on a near-daily basis. And as a full-time scientist, he sees that same dualistic power in the entity he’s spent his life studying: the immune system.

“The immune system is a friend; without it, we couldn’t live on Earth,” says Ware, director of the Infectious and Inflammatory Diseases Center at Sanford Burnham Prebys. “It helps protect us from all sorts of pathogens, and even cancer. But when the immune system sees an individual’s normal tissue as foe, autoimmune disease develops.”

"We’ve made tremendous strides in advancing
the science for conditions such as rheumatoid arthritis, lupus and psoriasis."

Learning how to navigate that delicate friend-foe line has been the focus of Ware’s 40-year research career. To do so, he and his research team take their cues from some of the planet’s foremost immune system experts: viruses.

One type of those immune system “teachers” are the herpes viruses. Best known for causing cold sores or chickenpox, this group of viruses can stay with a person for life, despite a strong immune system attack. 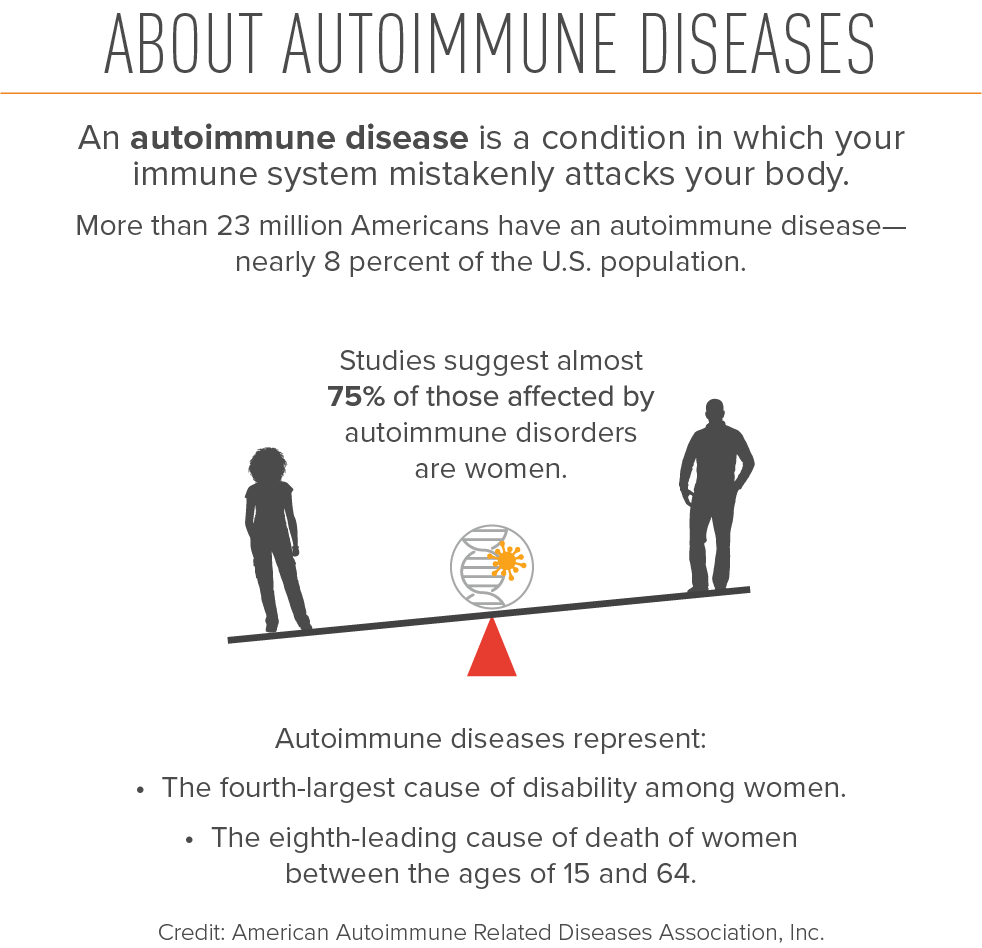 “The viruses have evolved techniques—tricks, if you will—that allow them to establish latency, where they hide out in certain cells,” Ware says.

Understanding this signaling system is at the heart of Ware’s research; and it has profound implications for treating autoimmune diseases, cancer and infectious diseases.
In fact, therapies based on manipulating immune signals already exist—including some cancer immunotherapy drugs known as “checkpoint inhibitors,” and drugs for autoimmune diseases.
Ware wants to add to that list. His work has led to the discovery of several tumor necrosis factor (TNF) cytokines and their signaling circuitry. Some of that work laid the foundation for an investigational autoimmune therapy that recently entered a Phase 1 clinical trial through a partnership with Eli Lilly [see box on left].

Currently, Ware and his team are working on another molecule they hope will lead to a potential autoimmune therapy. That project resulted from close observations of cytomegalovirus, a herpes virus that causes a mono-like illness. The virus has a gene that mimics a “checkpoint” cytokine, suppressing an immune response. The team developed a drug based on that gene.

On the flip side, the lab is working on a molecule that activates the immune system— directing it to tumors the immune cells were previously unaware of.

“Cancer and autoimmunity are two sides of the same coin,” Ware says. “In cancer, oftentimes the brakes are on the immune cells, and they can’t go after the tumor. In autoimmunity, the brakes have been taken off. We’re working to address both sides.” 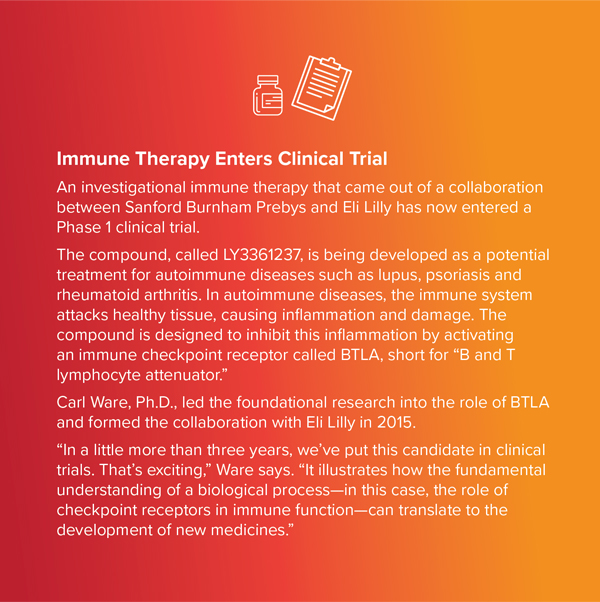 Growing up in Fullerton, Calif., Ware was not thinking about viruses—or even a career in science.

“I was surfing!” he says with a laugh.

But as an undergrad at the University of California, Irvine, he fell in love with biology.

Then, one fateful day during his junior year, he ran into a postdoc in the biochemistry department. The researcher let Ware look in the microscope while he added cytokines to a culture dish of cancer cells.

The cancer cells died. “They were all shriveled up, just basically floating there,” Ware remembers. “I thought, this is fantastic! I want to study this!”

He ended up getting his Ph.D. in that lab, working on TNF cytokines, and launched a career in immunology research that gives him as much joy today as it did that first day in the lab.

The other thing that gives him joy, of course, is surfing. One of his sons spent 12 years as a professional surfer, and Ware always participates in the Luau & Legends of Surfing Invitational in La Jolla, a cancer fundraiser. His other son shares the same passion for science, pursuing a Ph.D. in immunology.

But mostly, it is the excitement of venturing into the unknown—to catch that next wave of discovery—that draws him, day after day, to both science and surfing. 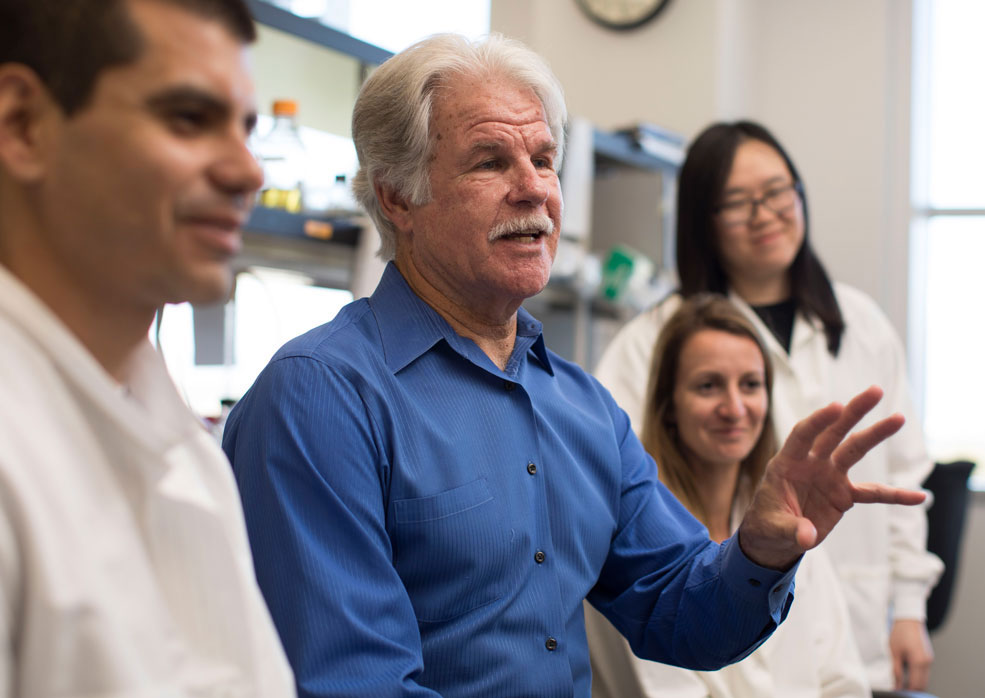 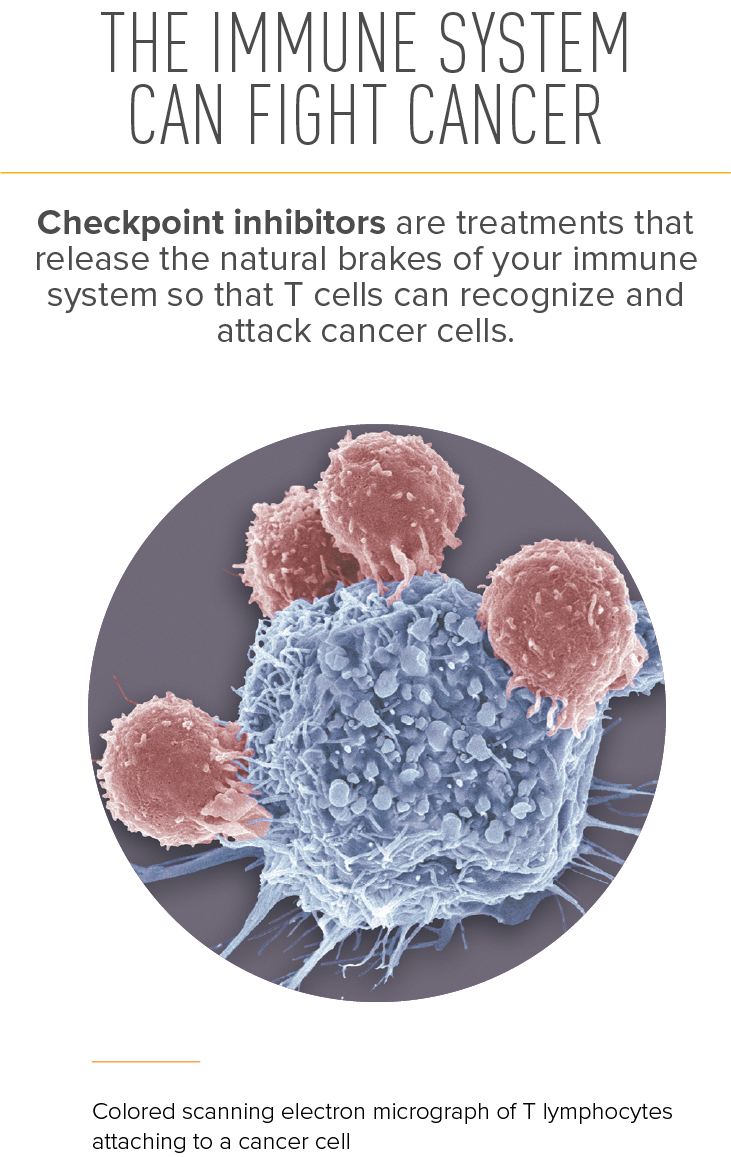