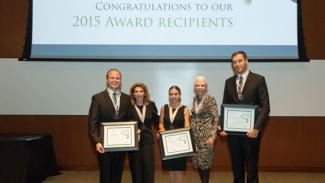 The 2015 Fishman Fund Award recipients were honored at an October 1 gathering of Sanford Burnham Prebys (SBP) supporters that celebrated the enduring legacy of the Institute’s founders, Dr. William and Lillian Fishman.

Herberger expressed personal thanks to all Fishman awardees past and present, and she had a special message for the new honorees. “When we look at you, we envision the future of biomedical research,” she said to them. “We will stand with you as you strive to fulfill your potential. And we will take great pride in your career achievements.”

The awards were presented to:

Jacob Daniel Brown, Ph.D. — Brown studies the molecular mechanisms by which the brain regulates food intake and energy expenditure. Working in the laboratory of Dr. Julio Ayala in the Center for Metabolic Origins of Disease, Brown hopes to elucidate brain regions and signaling events that can be used to develop more effective obesity therapies. His career goal is to establish an independent research program at an academic institution.

Petrus De Jong, M.D., Ph.D. — De Jong investigates the crosstalk between cancer cells and their microenvironment. Conducting research in the laboratory of Dr. Garth Powis in the NCI-designated Cancer Center, De Jong is focusing on the metabolic needs of tumor cells. He is currently testing novel drug candidates that target critical supply routes to achieve tumor cell death. His career goal is to develop innovative cancer drugs in a biotech environment.

Jessica Von Recum, Ph.D. — Von Recum has established a model for studying influenza virus infection. Working in the laboratory of Dr. Sumit Chanda, Von Recum is using her model to identify novel anti-viral compounds that target human host factors rather than the virus itself. Her approach aims to circumvent quickly emerging drug resistances due to the high mutation rate of influenza viruses. Her career goal is to work in the pharmaceutical industry developing effective drugs to treat respiratory viruses with high pandemic potential.

Bodhinathan, a SBP Senior Postdoctoral Fellow who studies neurodegeneration, told the assembled benefactors, including Nina Fishman, Bill and Lillian’s daughter, “Every day, as I walk to my job, I always remember that patients are waiting for us with much hope. It is to them that I dedicate my work.”

Mary Bradley and Reena Horowitz established the Fishman Fund Awards in 2001 to honor the Fishmans and advance the careers of promising young investigators. Since the fund was launched, 55 awards have been conferred, starting with $1,500 grants in the first year and now increased to $10,000 for each recipient.

Fishman Fund awardees use the support to further their professional development and fast-track their scientific progress. “The Fishman Fund is helping these young scientists,” Horowitz said in her welcoming remarks, “and they are helping all of us.”