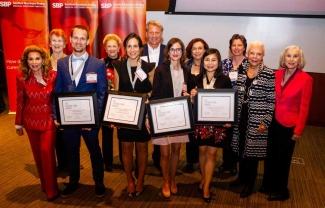 The evening began with a warm welcome from founder Reena Horowitz, who described how she began the Fishman Fund with the late Mary Bradley (her dear friend) to honor Dr. William and Lillian Fishman. The Fishmans were the founders of SBP and firmly believed in helping young postdoctoral scientists become great principal investigators—and these awards help boost young researchers to meaningful careers in science.

Jeanne Jones, the Fishman Fund’s co-founder designee, shared that since the fund’s inception, 64 recipients have been awarded. The career development awards—bestowed annually to three postdocs—provide a generous $10,000 stipend to allow them to attend workshops and travel to national and international conferences to learn the latest developments in their research fields. Additionally, a Fishman Fund Fellowship Award, which provides salary support for two years in addition to benefits and a career-development stipend, was awarded this year for the second time in SBP history.

The keynote speaker was Aman Mann, Ph.D., who won the Fishman Award in 2011. Today, Mann is a research assistant professor at SBP and an entrepreneur and founder of AivoCode, a neuroscience company that licenses technology originally developed at SBP. Mann reflected on how the award gave him added confidence and resources to pursue his career goals—and he encouraged this year’s recipients to similarly follow their dreams.

The 2018 Fishman Fund Fellowship winner, Usue Etxaniz Irigoien, Ph.D., was presented with her award by Reena Horowitz. Irigoien, originally from the Basque region of Spain, is the first in her family to pursue a graduate degree in science. She is currently a postdoctoral researcher in the laboratory of Lorenzo Puri, Ph.D., and is studying the communication between nerves and muscles. Irigoien’s research is providing insights that may lead to improved therapies for neuromuscular diseases such as ALS. In the future, she hopes to become a principal investigator of her own lab.

Koen Galenkamp, Ph.D., was presented with his award by Andrew Viterbi, a distinguished scientist and former SBP trustee. Galenkamp works in the laboratory of Cosimo Commisso, Ph.D., and specializes in seeking ways to starve pancreatic tumors of the food they need to survive and grow. Originally from Amsterdam, Galenkamp thanked his colleagues and wife—who is also a postdoc in San Diego—and shared his plans to use the funds to attend a comprehensive pancreatic cancer conference at Cold Spring Harbor Laboratories.

Laura Martin-Sancho, Ph.D., a postdoc in the lab of Sumit Chanda, Ph.D., received her Fishman Fund Award from Armi Williams, a Fishman Fund Board member and longtime SBP supporter. Martin-Sancho is working to develop antiviral medicines that will combat infectious diseases such as influenza, dengue, and West Nile and Zika viruses. Martin-Sancho’s career goal is to be an independent investigator in an academic organization. She will use her stipend to attend a Keystone RNA virus conference in Dublin, Ireland.

Ee Phie Tan, Ph.D., originally from Malaysia, joined SBP in 2016 to work in the lab of Malene Hansen, Ph.D. Tan is studying autophagy—a cell process that tidies up cell debris and recycles parts to maintain health. Defects in autophagy are linked to many aging-related diseases such as Alzheimer’s and Parkinson’s disease, and even cancer. Tan received her award from Reena Horowitz and will use the funds to attend a Gordon Research Conference in Texas and a Keystone Symposium in Santa Fe, New Mexico.