A bunch of scientists walk into a brewery... 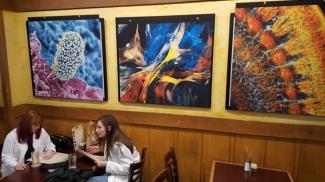 A bunch of scientists walk into a brewery…

It sounds like the beginning of a joke, and there were plenty of smiles at the Karl Strauss Brewery in downtown San Diego on April 5th, but they were on the faces of the people there to see science and art come together, as part of a BioArt exhibit.

The event showcased the beauty in what scientists see every day and wrapped up the American Society for Biochemistry and Molecular Biology (ASBMB) annual meeting in San Diego. BioArt is actually a competition sponsored by the Federation of American Societies for Experimental Biology (FASEB). SBP’s Dr. Hudson Freeze, is President-elect of FASEB.

The winning images on the walls of the brewery and videos shown on computers were submitted by scientists from all over the country. The idea is to share “captivating, high-resolution images and videos representing cutting edge, 21st century biomedical and life science research.” It’s what they see under the microscope, brought to life in a much larger scale.

“Art draws in your heart and soul, and here you see it in a different way,” said Dr. Hudson Freeze. “This event is important because this draws the public in, for science.”

There is a picture of a scalyhead sculpin, a fish with its skeleton stained red and its cartilage stained blue. It was taken by a scientist in Washington State who studies the relationship between joint mobility and shape.

There is a multi-colored photo of brain cells submitted by researchers in North Carolina who study long-term cocaine use on the brain.

A video entry that takes the viewer on a trip into a lung taken by a doctor at Children’s Hospital in Los Angeles looks like a video game about the human body, and could open up science to a new, younger audience.

Event organizer Dr. Teresa Evans of the UT Health Science Center said, “It’s great to be able to engage people in a non-traditional way, with art in a bar. It sparks important conversations about science.”