A celebration of science for Ruoslahti’s 80th birthday 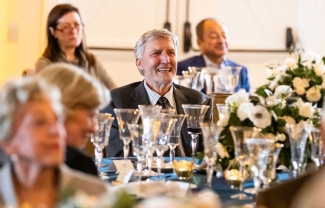 February 16 marked the 80th birthday of one of the most influential cell biology and cancer researchers, renowned scientist Erkki Ruoslahti, M.D., Ph.D. More than 300 guests celebrated the occasion with a scientific symposium and reception at the Estancia Hotel in La Jolla, California.

“This is a fantastic turnout of world-class scientists, colleagues, friends and family to honor Erkki," said Kristiina Vuori, M.D., Ph.D., president of Sanford Burnham Prebys. “The fact that so many people took time out of their busy schedules—some traveling very long distances—shows how much Erkki is respected and appreciated.”

Ruoslahti, a distinguished professor at Sanford Burnham Prebys and former president of the Institute (1989–2002), is widely recognized for his pioneering research on cell adhesion—the study of how cells stay in place by sticking to one another and to their surroundings. His most recent work on peptides that can target diseased tissue has led to a clinical trial for pancreatic cancer.

After opening remarks from Ze’ev Ronai, Ph.D., chief scientific adviser and professor at our Institute, the symposium kicked off with a lineup of influential scientists who presented their latest research as well as their journeys with Ruoslahti in science, sport and the love of fine wine.