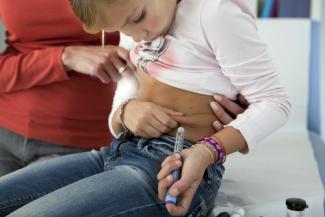 A new study by researchers at Sanford-Burnham Medical Research Institute (Sanford-Burnham) has found that a peptide called caerulein can convert existing cells in the pancreas into those cells destroyed in type 1 diabetes—insulin-producing beta cells. The study, published online July 31 in Cell Death and Disease, suggests a new approach to treating the estimated 3 million people in the U.S., and over 300 million worldwide, living with type 1 diabetes.

“We have found a promising technique for type 1 diabetics to restore the body’s ability to produce insulin. By introducing caerulein to the pancreas we were able to generate new beta cells—the cells that produce insulin—potentially  freeing patients from daily doses of insulin to manage their blood-sugar levels.” said Fred Levine, M.D., Ph.D., professor and director of the Sanford Children's Health Research Center at Sanford-Burnham.

The study first examined how mice in which almost all beta cells were destroyed—similar to humans with type 1 diabetes—responded to injections of caerulein. In those mice, but not in normal mice, they found that caerulein caused existing alpha cells in the pancreas to differentiate into insulin-producing beta cells. Alpha cells and beta cells are both endocrine cells meaning they synthesize and secret hormones—and they exist right next to one another in the pancreas in structures called islets. However, alpha cells do not normally become beta cells.

The research team then examined human pancreatic tissue from type 1 diabetics, finding strong evidence that the same process induced by caerulein also occurred in the pancreases of those individuals. The process of alpha cells converting to beta cells does not appear to have any age limitations—it occurred in young and old individuals—including some that had type 1 diabetes for decades.

“When caerulein is administered to humans it can cause pancreatitis. So our next step is to find out which molecule(s) caerulein is targeting on alpha cells that triggers their transformation into beta cells. We need to know this to develop a more specific drug,” said Levine.

Caerulein is a peptide originally discovered in the skin of Australian Blue Mountains tree frogs. It stimulates gastric, biliary, and pancreatic secretions, and has been used in humans as a diagnostic tool in pancreatic diseases.

“In addition to creating new beta cells, another issue that needs to be addressed to achieve a cure for type 1 diabetes is that any new beta cells will be attacked by the autoimmune response present in every patient with type 1 diabetes. We are currently working with Linda Bradley, Ph.D., professor in the Immunity and Pathogenesis Program, and co-author of the study, to couple our approach with an approach to reining in the autoimmune response,” added Levine.

The study was funded by the Sanford Children’s Health Research Center, BetaBat (in the Framework Program 7 of the European Community) and CIRM grant TG2-01162.