A nuclear receptor that binds more than 5,000 sites in the genome—and promotes angiogenesis. 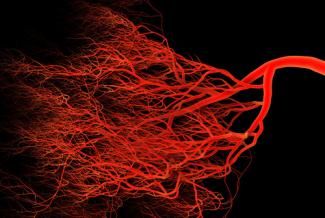 The retinoid X receptor (RXR) is a nuclear hormone receptor—meaning that it sits on various parts of the genome—and turns genes “on” and “off.” RXR is known to play an important role in many fundamental biological processes such as reproduction, cellular differentiation, bone development, and hematopoiesis.

But the genomic basis for how RXR governs these processes was unknown. And, were there other biological functions that RXR activated that hadn’t been discovered?

Using macrophages isolated from the bone marrow of mice, Laszlo Nagy, M.D., Ph.D., professor and director of the Genomic Control of Metabolism Program at Sanford-Burnham, worked closely with his research group in Hungary to perform a series of genome-wide studies to unveil ALL of the gene sites that RXR binds, which of those sites were biologically relevant, and the functions of the genes that are activated by RXR. Although the RXR receptor is present in a number of cell types, macrophages were chosen because RXR was known to have a significant impact on their function.

To their surprise, they found that RXR bound to 5,206 sites on the genome. Of these, 2,781 were sites that controlled gene transcription, and 2,425 sites remained inactive even when RXR was bound to molecules known to activate it.

Even more important than the number of RXR binding sites was the discovery that the biological function called angiogenesis was regulated by the receptor.

“We were delighted to find that a specific set of the RXR activated genes were genes that promote the formation of new capillary blood vessels in the body,” said Nagy. “This is important because the process, known as angiogenesis, is a natural process used for healing and reproduction. But angiogenesis is also a fundamental process underlying many deadly and debilitating diseases, including cancer, cardiovascular disease, diabetic ulcers, and age-related blindness.”

“Finding new drugs that inhibit angiogenesis is a very active area of cancer research. Tumors are known to release angiogenic growth factors to stimulate new blood vessels to grow into the tumor, providing it with oxygen and nutrients. If we can find new drugs that inhibit RXR to minimize the activation of angiogenic genes, we could potentially starve tumors of their blood supply.”

“In contrast, stimulating angiogenesis could lead to regeneration of capillaries that are needed to replenish the blood supply to wounds, tissues affected by poor circulation, and even coronary artery disease,” added Nagy.

Nagy’s research team will now focus on validating the findings. They will look into the growth of tumors in animals where RXR has been eliminated and perform further genomic studies on human tumors.

“It’s impossible to say how long this type of study would have taken before the availability of the genomic technologies that are available today. We used to have to look at receptor interactions with the genome one interaction at time. To exhaustively characterize the RXR receptor as we have done in this study would take more years than I care to think,” Nagy said.

The study was published in the July 17 issue of Genes & Development. To see the full text of the paper click on this link: http://genesdev.cshlp.org/content/28/14/1562.full