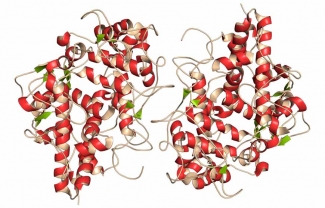 An immune system protein that usually protects the body from pathogens is abnormally produced in the brain during Parkinson’s disease, scientists from Sanford Burnham Prebys report. The discovery, published in Free Radical Biology & Medicine, indicates that developing a drug that blocks this protein, called myeloperoxidase (MPO), may help people with Parkinson’s disease.

“Prior to this study we knew that MPO was a powerful oxidizing enzyme found in white blood cells used to protect us from microbial infections,” says Wanda Reynolds, Ph.D., senior author of the study and adjunct associate professor at Sanford Burnham Prebys. “This is the first time that scientists have found that MPO is produced by neurons in the Parkinson’s disease brain, which opens important new directions for drug development.

Parkinson’s disease occurs when the neurons that control movement are impaired or destroyed. Over time, people with the disease lose mobility. The disorder affects men more than women; most people develop the disease around age 60. Currently available medicines address the disease’s symptoms, not the root cause. There is no cure.

“We then created unique mice that modeled Parkinson’s disease and expressed MPO. These mice accumulated toxic, misfolded proteins in the brain. Additionally, the MPO produced in the brain had an altered shape. As a result, instead of being stored inside neurons, MPO is capable of being ejected from the cell and cause further brain damage. We also found that MPO was located preferentially in the memory-associated regions of the brain—the cortex and hippocampus—indicating it plays a role in memory disruption.”

The first author of the study is Richard A. Maki, Ph.D., of Sanford Burnham Prebys. Additional authors include Michael Holzer, Ph.D., Gunther Marsche, Ph.D., and Ernst Malle, Ph.D., of the Medical University of Graz; Khatereh Motamedchaboki of Sanford Burnham Prebys; and Eliezer Masliah, M.D., of the National Institutes of Health (NIH) and University of California, San Diego.

This work was supported by the NIH (ROINS074303, ROIAG017879, and ROI AG040623) and the Austrian National Bank (17600). The content is solely the responsibility of the authors and does not necessarily represent the official views of the NIH.