Are stem cells to blame for cancer re-growth? 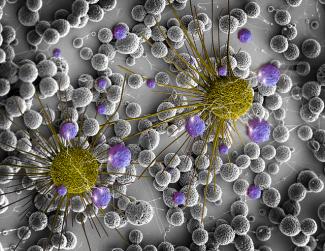 The scientific and popular media are both full of excitement about the use of stem cell therapies for replacing diseased or damaged tissues. In a new twist to this story, researchers are wondering if small populations of stem cells present in tumors (known as cancer stem cells) may be responsible for the ability of cancers to survive and re-establish themselves, even after the malignancies are apparently eliminated by a combination of surgery, chemotherapy and radiotherapy.

In a new report in the Journal of Clinical Oncology, Robert Wechsler-Reya, Ph.D., director of the Tumor Initiation and Maintenance Program at SBP, Luis Parada, Ph.D., from Memorial Sloan Kettering Cancer Center and Peter Dirks, M.D., Ph.D., from Toronto’s Hospital for Sick Children, review the evidence that cancer stem cells may contribute to brain tumor re-appearance. As background, Wechsler-Reya explains that, “There are several good theories about how tumors can develop resistance to therapy and then re-appear after therapy ends. One theory proposes that the unique regenerative properties of cancer stem cells underlies the ability of tumors to rebound.”

According to Wechsler-Reya, some of the best evidence for the existence and power of cancer stem cells comes from studying brain tumors in mice. “Researchers have analyzed several types of mouse brain cancers by separating the tumor cells into pools that carry different markers (like sorting a bag of M&Ms into piles containing the different colors). These separate pools are then injected back into the brains of new mice to compare their tumor-growing abilities. Cells with markers thought to characterize brain tumor stem cells (e.g. the red M&Ms) can produce new tumors even when very few cells are injected. In contrast, the majority of tumor cells (all the other colors of M&Ms) have very poor ability to produce new tumors, highlighting the unique regenerative power of the cancer stem cell population.”

Researchers can now do similar experiments with human brain cancers by injecting tumor cells into special mice that lack an immune system and thus can’t reject the human cells. These studies show that human brain tumors also contain cancer stem cells that can regenerate tumors when transplanted in low numbers. These mouse studies may therefore serve as valuable tools for understanding human brain tumor stem cells and for devising ways to deal with them. For example, researchers hope that cancer stem cells may prove vulnerable to new types of targeted therapies that don’t depend on rapid tumor cell proliferation for their success. Such therapies would destroy cancer stem cells along with the other tumor cells, hopefully avoiding tumor re-growth.

Read a copy of the paper here.