Autism researcher raising a son with autism shares his story 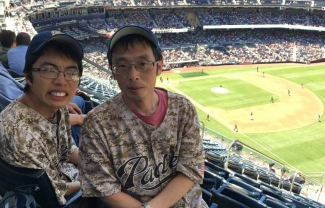 He didn’t talk often, and when he did, it was garbled. He didn’t make eye contact. He performed repetitive motions. As a neuroscientist, Irie’s instincts sent him to the neurology textbooks at the library. There, he found the symptoms aligned perfectly with autism.

“Our pediatrician confirmed my suspicions. But at the time, autism was not well known in Japan. A diagnostic system didn’t exist yet, and neither did therapy or other services,” says Irie, now a research assistant professor at Sanford Burnham Prebys in the laboratory of Yu Yamaguchi, M.D., Ph.D. “Our doctor told us that the best resources for our son were in the U.S.”

Luckily, moving to America was a natural next step for Irie’s scientific career. He and his wife decided to move to California to join Yamaguchi’s laboratory. He’s worked at Sanford Burnham Prebys ever since.

“Now, we have great providers and are very happy about the services in San Diego. But I will admit those first years were stressful,” recounts Irie. “Everything changed. We didn’t speak English very well and we didn’t know the right people to contact. It took us a few years to get settled.”

Autism, also known as autism spectrum disorder (ASD), is a developmental disorder that affects communication and behavior. Symptoms can range from very mild to severe. Approximately 1 in 59 children are diagnosed with autism, according to the Centers for Disease Control and Prevention (CDC), with boys four times more likely to be diagnosed than girls. While the cause of autism is currently unknown, some studies indicate that genetics are involved. However, more research is needed to form a conclusive answer.

“It’s unlikely that a single gene mutation causes autism,” says Irie. “Multiple factors are likely involved, which explains why the condition appears as a spectrum disorder.”

Irie’s autism research originated from an unexpected place: a phone call from a woman named Sarah Ziegler whose son has a rare disease called multiple hereditary exostoses (MHE) that causes numerous bone tumors in children. As the co-founder of the MHE Research Foundation, she noticed that children with MHE often displayed autistic behaviors.

Irie and Yamaguchi were studying the genes that cause the rare disease, EXT1 and EXT2. These genes are necessary to produce heparan sulfate, a long sugar “tree” that dangles off of the edge of cells and clasps important proteins and molecules. After Sarah’s observation, they began looking into potential connections to autism.

For Irie, it was a welcome opportunity to study the condition that had changed his life.

First, he created a mouse model that allowed control over the timing and location of EXT1 expression, called a conditional knock out mouse. When he applied a “social reunion test,” in which mice are separated and their behavior post-reunion is studied, he found the reunited mice that lacked EXT1 didn’t interact with each other normally. They co-existed peacefully but didn’t sniff each other and cuddle as they did before. This finding was published in a 2014 paper in the Proceedings of the National Academic of Sciences (PNAS).

Now, Irie is unraveling the molecular dynamics behind this behavior. He’s focused on determining which molecules and proteins interact with heparan sulfate, with a particular focus on the molecular messages sent between neurons.

Irie is quick to note there are caveats to his research: Autism is a spectrum disorder so this may not apply to all children, and heparan sulfate is expressed on many cells and regulates many functions so it is unlikely to be a good target for a potential medicine.

However, he hopes his research could reveal new insights into autism. While heparan sulfate may not be the right medicinal target, it’s possible there is a protein or still-unknown-factor that interacts with the heparan sulfate “tree” and could be the clue that leads to a drug candidate.

Today, Irie’s son is almost 22 years old. He lives at home and enjoys participating in a job training program that is organized by the San Diego School District.

“I love my son just the way he is,” Irie says. “At the same time, I welcome approaches that could ease his suffering because of hypersensitivity or anxiety. Often, everyday experiences are painful to him, such as the sound of a door closing, and it would be wonderful to make that easier for him to bear.”

Interested in keeping up with our latest discoveries, upcoming events and more? Subscribe to our monthly newsletter, Discoveries.