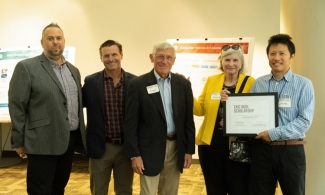 For the first time since the pandemic, Sanford Burnham Prebys presented the Eric Dudl Endowed Scholarship Award in person at last week’s Cancer Center Open House. This year’s recipient, selected by leaders at the Cancer Center, was Jia Zack Shen, Ph.D., a staff scientist in the lab of Charles Spruck, Ph.D. The award pays tribute to Eric Dudl, a postdoctoral researcher who succumbed to cancer in 2006, when he was just 33.

“Eric was ill at such a young age, but he was also very lucky because he knew exactly what his dream job was and what his life meant,” says Shen. “Eric’s compassion and dedication to cancer research has been inspiring and encouraging for our postdocs here at Sanford Burnham Prebys. Thank you to the Dudl family for helping me continue my career here.”

Honoring Eric Dudl
In 2005, Eric Dudl had just begun his postdoctoral research in a cancer lab at Sanford Burnham Prebys, where he was known as kind, helpful and a fast learner. Then, at age 32, he was diagnosed with non-small cell lung cancer. This only fueled his fiery passion for cancer research.

“Even when he was very ill, Eric wanted to make a contribution in the time he had,” says Jim Dudl, M.D., Eric’s father. “One day I looked at Eric and asked, ‘Why don’t you take some time off work? Get your energy back and go back in when you feel better?’ He looked up at me and said, ‘Why would I do that? This is the best job in the world!’”

Tragically, Eric Dudl would pass away in 2006, at age 33. The next year, his parents established the Eric Dudl Endowed Scholarship Fund to support young cancer researchers like their son.
“These talented scientists pick up where Eric had to leave off,” says Barbara Dudl, Eric’s mother.

“We are so grateful to the Institute for their compassion for Eric during his illness and helping us create this scholarship. The scientists who are now working on new discoveries might one day save the life of someone like Eric."

The award presentation was emceed by Cosimo Commisso, Ph.D., and featured comments from Eric’s parents, as well as his brother, Bret.

“This scholarship fund is the best way we can honor Eric, because he was so passionate about education and supporting others,” says Bret. “The fact that he now helps other postdocs further their work to fight cancer is exactly what he would have wanted.”

Meet the recipient: Jia Zack Shen
Shen started at the Institute as a postdoctoral researcher in 2016, winning a Fishman Fund Award that year. He has since transitioned to a permanent role as a staff scientist, and the funding from this award will help continue to support his role.

“Sanford Burnham Prebys has a great, noncompetitive atmosphere, and the resources we have here are excellent,” says Shen. “Combining cancer research with the drug discovery capabilities we have at SBP is my dream.”

Shen’s research focuses on killing cancer stem cells by shutting off their ability to self-renew and by promoting a response from the immune system, delivering what Shen and his colleagues call a “one-two punch.” Shen has been working specifically on glioblastoma, one of the most aggressive brain cancers.

“Glioblastoma is one of the most devastating diseases, and there is a desperate need for better ways to treat it,” says Shen. “I am working hard to leverage the immune system to fight glioblastoma and save thousands of lives.”