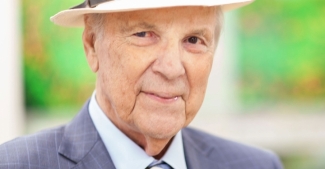 Conrad Prebys was an extraordinary man and a passionate philanthropist. Today, his generosity extends beyond his life through the Conrad Prebys Foundation.

This year, the Foundation provided $3 million to Robert Wechsler-Reya, Ph.D., and his team of researchers to advance a potential drug to treat medulloblastoma—the most common malignant brain tumor in children.

Children with medulloblastoma often receive aggressive treatment (surgery, radiation and chemotherapy), but many still die of their disease, and survivors suffer long-term effects from therapy. Safer and more effective therapies are desperately needed.

Wechsler-Reya recently combined forces with Michael Jackson, Ph.D., senior vice president of Drug Discovery and Development, to find a drug(s) that would inhibit the growth of Group 3 medulloblastoma, the most aggressive form of the disease. Using high-throughput screening technology, they identified a compound that reduces levels of a protein called MYC, which is found at exceptionally high levels in Group 3 medulloblastoma, as well as in cancers of the blood, breast, lung and prostate.

“An effective MYC inhibitor could have a major impact on the survival and quality of life of patients with medulloblastoma,” says Wechsler-Reya. “We identified a compound that reduces levels of MYC in medulloblastoma cells, but now we need to learn how it works to optimize it as an anti-cancer drug and advance studies toward the clinic.

“Historically, pharmaceutical companies and funding agencies have under-invested in childhood cancers, and the majority of drugs currently used to treat these cancers were originally developed for adult cancer,” adds Wechsler-Reya. “We believe that effective drugs for pediatric brain tumors must be developed—and this award from the Foundation will help us achieve this goal.”

“We are profoundly grateful to Conrad for his generosity over the years,” says President Kristiina Vuori, M.D., Ph.D. “He has a special legacy at our Institute, which was renamed Sanford Burnham Prebys in 2015 to honor him. We are now thankful to his Foundation for including us in their inaugural grant cycle, and for supporting the critical work we do to benefit children and others suffering from cancer.”