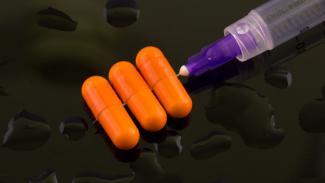 November is American Diabetes Month. Throughout the month, we will be highlighting our research contributions to this increasingly prevalent disease.

The growing epidemic of diabetes presents significant challenges for health care. It ranks 7th among the leading causes of death, and about one tenth of all health care dollars are spent on diabetes and its complications. According to the American Diabetes Association, 29.1 million Americans have been diagnosed with this metabolic disorder, and 1.4 million new cases were reported in 2013. With these statistics, the burden diabetes has on the health care system will continue to rise.

Opportunities to research the disease have also increased with the growing diabetic population. One particular area of emphasis is in understanding how glucose—a type of sugar—is broken down, or metabolized, in diabetic patients. Glucose is the major energy source our body uses to carry out activities. Glucose levels in the blood are kept constant by a hormone called insulin. After eating, the glucose level in the blood rises and signals insulin release. Insulin is like a key that opens up the locks on our cells so that glucose can enter. Glucose can then be stored in the form of glycogen and used later for energy. If our body does not make enough insulin, or insulin is not well recognized by the cell, then glucose levels will build up in the blood stream causing diabetes and other long-term complications.

Treating Diabetes Diabetic treatments are primarily developed to lower the amount of blood glucose by restoring the secretion of insulin or enhancing how well insulin works to promote the entry of glucose into cells. Another hormone called glucagon-like-peptide-1(GLP-1) has been shown to increase glucose-dependent stimulation of insulin release, and GLP-1 based drugs are used to treat diabetes. Julio Ayala, Ph.D., and his research team are working on projects that utilize GLP-1 based drugs to stimulate insulin secretion. These drugs come in two categories, GLP-1 analogs that mimic the action of GLP-1 and dipeptidyl peptidase 4 (DPP-4) inhibitors that prevent the breakdown of GLP-1 made in the body. Although both drugs can effectively lower glucose levels, one promotes weight loss while the other does not.

A new avenue for weight loss? Preliminary research performed in Ayala’s lab confirmed that the two drugs have different effects on food intake. “Interestingly, when targeted to specific regions in the brain, GLP-1 analogs reduce food intake to a greater degree than does native (natural) GLP-1. This may partly explain why GLP-1 analogs promote weight loss while DPP-4 inhibitors that increase native GLP-1 levels do not,” Ayala explained. “This leads us to speculate that even though both drugs bind to the same receptor in the feeding centers of the brain, they activate different molecular mechanisms in cells of the brain and this eventually results in different effects on food intake, and therefore, weight loss.”

As Ayala’s team continues to explore the mechanism of action, they hope to identify the critical steps that lead to the reduction in food intake. “Obesity is a leading risk factor for developing Type 2 diabetes. If we can discover the steps that GLP-1 analogs engage to promote weight loss, then drugs can be designed to specifically target these steps. This would provide a new avenue for designing drugs to treat obesity,” Ayala added, “and that could deliver a greater benefit to diabetes patients and contribute to decreasing the rise in Type 2 diabetes. We are excited to see the possibilities.”

This post was written by Jing Ping Lu, Ph.D., a post-doctoral associate in Dr. Rastinejad’s lab in Lake Nona.