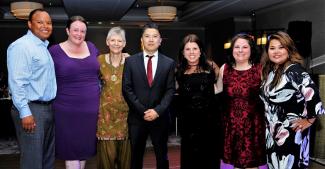 Associate Professor Duc Dong, Ph.D., was the guest of honor at the Gala of Dreams, the inaugural fundraiser for the Alagille Syndrome Alliance held June 30 at the San Diego Marriott Del Mar. Dong is a trailblazer in the field of Alagille syndrome research—he is working toward a cure for the extremely rare genetic condition that affects approximately one in 30,000 births.

Babies born with Alagille syndrome have too few bile ducts—which are essential for the transport of waste out of the liver. This causes toxins build up in the liver and throughout the body, leading to constant severe itching, and more critically, liver damage and failure. Alagille syndrome patients also have many other life-threatening developmental defects in other parts of their bodies, including the heart, kidneys, vertebrae, and blood vessels. There is no cure for this debilitating disease, and up to 50 percent of patients eventually need a liver transplant, often during childhood.

Dong and his team have been studying JAGGED1, the gene implicated in Alagille syndrome. Taking advantage of an unusual animal model, the zebrafish, he has been able to uncover a novel genetic mechanism for the disease—opening new potential therapeutic avenues. Further, his team has surprisingly discovered that the bile ducts lost can be regenerated after turning the affected gene back “on.”

“The implication is that these developmental defects in Alagille syndrome patients could potentially be reversible and therefore curable,” says Dong. “We will now start screening for drugs that may be used to restore the function of this genetic pathway and hopefully allow for these lost bile ducts to regenerate. We will continue to challenge the science of Alagille syndrome to move closer to a cure.”

The theme of the event, “The Dawn of a Dream,” signified new advances in Alagille syndrome research and the anniversary of the organization’s 25th year in existence. The evening gave advocates, families, doctors and pharma representatives an opportunity to interact in a fun, casual setting and participate in a silent auction to raise money for research. Dong’s lab was presented with the Champion of Alagille Syndrome Award and funds raised by the Alliance through crowd sourcing.