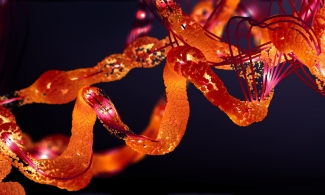 Researchers from Sanford Burnham Prebys have shown that a protein they identified plays a major role in the breakdown of hyaluronic acid, a compound found in the scaffolding between our cells. The findings, published recently in the Journal of Biological Chemistry, could have implications for epilepsy, cancer and other human diseases associated with hyaluronic acid and similar compounds.

They also shed light on one of the most active biochemical processes in the body.

“Our body turns over hyaluronic acid at an extremely rapid rate, far faster than the other compounds surrounding our cells,” says senior author Yu Yamaguchi, M.D., Ph.D., a professor in the Human Genetics Program at Sanford Burnham Prebys.

Hyaluronic acid, a common ingredient in cosmetic anti-aging products, is a one of several large sugar molecules known as glycosaminoglycans (GAGs). These are found naturally in the extracellular matrix, the complex network of organic compounds surrounding our cells that gives structure to our tissues. In addition to its structural role, the extracellular matrix is involved in regulating the immune system and is critical in the early development of connective tissues like cartilage, bone and skin.

“The extracellular matrix is found in every organ and tissue of the body, and malfunctions in its biochemistry can trigger or contribute to a variety of diseases, some of which we don’t even know about yet,” says Yamaguchi. His team studies how GAGs affect childhood diseases including congenital deafness, epilepsy and multiple hereditary exostoses, a rare genetic disorder that causes debilitating cartilage growths on the skeleton.

“These compounds are literally everywhere in the body, and we continue to learn about how GAG’s influence disease, but there’s also a lot we still don’t know about how these molecules are processed,” says Yamaguchi, “Research like this is about understanding what’s happening at the molecular level so we can later translate that into treatments for disease.”

For this study, the team focused on a protein called TMEM2, which they had previously found to break down hyaluronic acid by cutting the longer molecule into manageable pieces for other enzymes to process further. Using mice as a research model, they selectively shut off the gene that codes for TMEM2 and were able to successfully measure precisely how much the absence of TMEM2 affects the overall levels of hyaluronic acid.

The answer: a lot.

“We saw up to a 40-fold increase in the amount of hyaluronic acid in the study mice compared to our controls,” says Yamaguchi. “This tells us that TMEM2 is one of the key players in the process of degrading this compound, and its dysfunction may be a key player in driving human diseases.”

“These findings refine our understanding of this critical biochemical process and set us up to explore it further in the interest of developing treatments for human diseases,” says Yamaguchi. “Hyaluronic acid is so much a part of our tissues that there could be any number of diseases out there waiting to benefit from discoveries like these.”