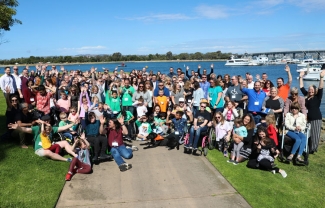 This year’s event centered on CDG, a rare genetic condition that affects around 1,500 people worldwide.

With more than 270 attendees and 30 world-renowned scientists and clinicians, Sanford Burnham Prebys’ 11th Annual Rare Disease Day Symposium was officially the largest in the event’s history. This year’s discussion centered on congenital disorders of glycosylation, or CDG, a rare genetic condition that affects around 1,500 people worldwide.

“Our annual symposium aims to create an ecosystem in which key stakeholders can collaborate and communicate,” said Hudson Freeze, Ph.D., director of the Human Genetics Program at Sanford Burnham Prebys and symposium chair. “Together, we celebrate our successes, focus on challenges and discuss the future of CDG research.”

Presenters at the meeting described the power of the ecosystem. Since the first conference a decade ago where scientists reported on the basic biology of CDGs, today we have promising clinical trials for the most common CDG mutation. In addition, a historic nationwide effort to establish the natural history of CDGs launched this year—which addresses decades of unresolved questions and helps remove barriers to starting clinical trials.

First discovered in the 1990s, scientists now know that CDG is caused by mutations that disrupt the body’s normal process of attaching sugars to proteins. Children with CDG have varying degrees of speech and language difficulty, poor balance, motor control, vision problems, hearing impairments and seizures.

Because CDG is rare, many patients bounce between doctors and clinics for years before they receive an accurate diagnosis. At the symposium, an innovative session called the “Doctor-is-in” session connects families with medical researchers and clinicians in small groups. For some medical researchers, the session is the first time they have met a person with CDG.

The conference was co-organized by Sanford Burnham Prebys and CDG CARE, a nonprofit organization founded by parents seeking information and support for CDG.