Get the flu shot before it’s hot 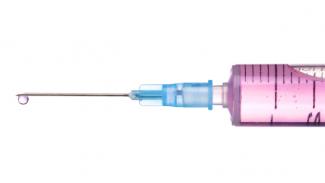 Flu season is arriving, and the U.S. Centers for Disease Control and Prevention is putting out a plea for everyone 6 months and older to get their flu shots—the sooner, the better.

You may have heard the news that last season’s vaccine was weak against one flu strain in particular: H3N2, which is the most deadly. To understand why, you’d have to know a bit about how vaccines work.

What is the flu vaccine, exactly?

The standard flu shot contains three inactivated flu viruses. The purpose of these inactivated viruses is to prompt your body to generate antibodies that will be ready to fight off the real flu.

Although some versions of the vaccine include a fourth virus, this season’s standard ‘trivalent’ shot contains:

How is the vaccine designed?

Although your age and health also play a role, the closer flu vaccine is to the circulating viruses, the better chance for protection. However, to get a close “match” is a bit of a guessing game because viruses evolve rapidly and sometimes unpredictably.

Adding to the challenge is that U.S. manufacturers need at least 6 months lead time to generate enough doses for a given season: about 171 to 179 million will be generated for 2015-16, for example. The standard vaccine is made in chicken eggs, which takes a while. But scientists are also pursuing faster methods: cell-based flu vaccines, which are already approved in Europe.

Based partly on surveillance data from more than 100 national influenza centers around the world, the World Health Organization issues its recommendations for flu strains in February of each year, to give enough time for private manufacturers to start producing doses (though some manufacturers, based on a best guess, start producing vaccines even earlier). The U.S. Food and Drug Administration makes the final decision about which strains the U.S. will include in its vaccines.

How do researchers measure success?

How well a vaccine does each season is informed by constant surveillance. Experts from the CDC take data from the U.S. Flu Vaccine Effectiveness Network, a collaboration between the CDC and five institutions across the United States. The sites are clinical settings, meant to represent the U.S. as a whole, where patients with flu-like symptoms are tested (using reverse transcription polymerase chain reaction) to confirm if they have the flu, and how genetically different it is from the vaccine strain.

Why did last year’s vaccine perform so poorly?

According to the CDC, last season’s vaccine was only about 19% effective at preventing flu (or, more precisely, a person’s chance of seeking medical treatment for flu). In contrast, in the past decade, the effectiveness rates have been more in the range of 60%, though the estimates are by no means precise.

A study published in the journal Cell this past summer shows that the main reason was ‘antigenic’ drift: the circulating H3N2 acquired mutations, one in particular that prevented a person’s antibodies from recognizing it.

Where can I learn more?

For all you ever wanted to know about flu, check out the CDC’s flu pages. For a weekly U.S. influenza surveillance report by the CDC — if you’re into charts and graphs, you’ll like this — check out FluView. (FluView is also available as a free app on iTunes.) Note that it’s not appropriate to compare rates across different regions or seasons because of differences in the number of specimens tested and different testing practices.

But if you get the flu

Although there are some drugs approved by the FDA to treat the flu, most have to be taken within 48 hours of onset to be effective.

At SBP, Dr. Jessica von Recum is working on a new approach for influenza therapy. She is using ex vivo human lung tissue to screen for novel antiviral compounds that target proteins in the host (that’s you) that the virus needs to complete its life cycle. Jessica is starting by blocking host cell proteins called proteases to stop viruses from replicating. This is just one approach—she plans to target other proteins as well.

To read more about Dr. von Recum’s research and the unique way that SBP is funding her research, click here.

This post was written by Kelly Chi, a freelance writer.

centers for Disease Control and Prevention