Hospitals were full. One scientist stepped up. 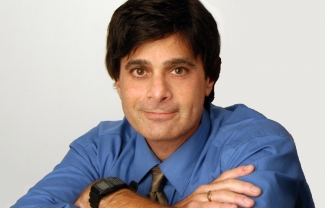 Sanford Burnham Prebys physician-scientist Evan Snyder spent two weeks in a gymnasium-turned-ICU, where he cared for people with severe COVID-19

The novel coronavirus has hit California hard, but one area that has been particularly impacted is Imperial County. Last spring, the rural farming region’s two hospitals became overwhelmed with COVID-19 cases—prompting a college basketball stadium to be converted into a makeshift intensive care unit (ICU). Soon, qualified personal were also needed.

Stem cell scientist Evan Snyder, M.D., Ph.D., may not be the first person you would think to call on during such an emergency. But as a physician-scientist who works with critically ill newborns, he knows his way around an ICU. He knows how to run ventilators. And perhaps most importantly, he had an urgent desire to help.

“I had already decided I would study this disease from a scientific perspective,” says Snyder, who is working with UC San Diego’s Sandra Leibel, M.D., to use “mini lungs” to understand why some people with COVID-19 fare worse than others. “But as I started to see the public health menace it became, I felt like I needed to do more.”

Snyder started to sign up for every volunteer opportunity he could find. However, it wasn’t until the December post-holiday surge in cases when he was deployed to serve in the field. Through the California Medical Assistance Team (CAL-MAT), a group of highly trained medical professionals who provide assistance during disasters, Snyder was deployed to the gym-turned-ICU in Imperial County.

“Although our research examines the impact of the virus on lung cells created from people of many racial and ethnic backgrounds, the degree of disease disparity didn’t hit me at a gut level until this work,” says Snyder. “There's no question that COVID-19 is unfairly hitting people who are socio-economically challenged and have co-morbidities such as diabetes and hypertension, which are the often the products of a disadvantaged environment.”

All of the people he treated had conditions that are linked to poverty. More than 20% of people living in Imperial County live below the poverty line—double the national average. As a result, residents may be more likely to obtain food from food banks and may not have access to regular healthcare—which together can lead to conditions such as diabetes, hypertension or obesity. Many of the people whom Snyder cared for shared that they lived in small quarters with multiple generations, which made quarantining difficult, if not impossible.

“Some people who live in La Jolla and test positive have the luxury of living in a big house. They can afford not to go to work and stay in a separate bedroom while the rest of the family quarantines,” says Snyder. “The people I took care of can’t do that. We need to create places where people who test positive for COVID-19 can quarantine safely away from their families.”

Carrying insights back to the lab

“We already model real-world COVID-19 infections with ‘mini lungs’ created from different genders and races,” explains Snyder. “But this taught me that we need to better mimic the conditions present in a person who has diabetes or other conditions that create an adverse milieu for their organs and cells.”

This work also imprinted upon him that COVID-19 is more than a lung condition. The risk of blood clots causing strokes, heart attacks or blocking blood flow to the lungs was an ever-present concern.

“It wasn’t just about giving people more oxygen,” says Snyder. “This showed me that we need to focus even more on the vascular and inflammatory components of this disease.”

Snyder is relieved to report that no lives were lost during those two weeks. He credits the care given—even if relatively primitive—to this success.

“If we weren’t doing what we were doing, about 30% of the people there would have died. And another 30% would have been left with lifelong impairments,” says Snyder. “However, in order to truly tame this virus, we need to find effective drugs, continue to vaccinate as many people as possible and exercise logical public health precautions.”