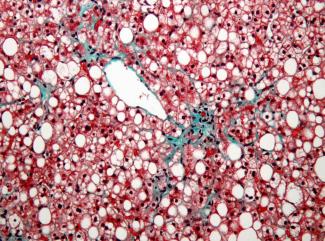 Nonalcoholic fatty liver disease (NAFLD) is quietly becoming an epidemic alongside obesity—up to 20% of people in Western countries have it. Though NAFLD, the mildest of a spectrum of liver diseases characterized by excess fat in liver cells, has no symptoms at first, it increases risk for liver cancer and can worsen to nonalcoholic steatohepatitis (NASH) or even liver failure.

There are no specific treatments for NAFLD, but cholesterol-lowering drugs called statins appear to slow its progression to more serious liver inflammation and fibrosis/scarring, characteristics of NASH. However, they haven’t been widely adopted, in part because of concerns about statins’ potential liver toxicity, though recent analyses suggest that severe toxicity is rare.

Now, a study co-led by Timothy Osborne, Ph.D., professor and director of the Integrative Metabolism Program, and published in Scientific Reports, outlines the molecular pathway through which statins break down fat stores in the liver.

“We show directly that these drugs reduce the amount of fat molecules and cholesterol in the liver in an animal model of NAFLD,” said Osborne. “Our results provide support for using statins to treat NAFLD itself, even if patients’ serum cholesterol isn’t dangerously high.”

The experiments were initiated by Young-Kyo Seo, Ph.D., now a professor at the Ulsan National Institute of Science and Technology, while he was a postdoc in Osborne’s laboratory. The study was based on previous work that found statins activate a protein called SREBP-2, a transcription factor that activates genes to regulate cholesterol balance.

The new study provides some hints as to PNPLA8’s mechanism. Statins are known to enhance a cellular recycling process called autophagy, which breaks down cell parts—such as lipid droplets, the site of fat storage—for energy and re-use. The new results suggest that this may depend on PNPLA8’s ability to target the autophagy machinery directly to lipid droplets.

“This is the first time PNPLA8 has been implicated in freeing fat from liver cells,” Osborne commented. “Looking in more detail at how it mobilizes fat stores will give us an idea of whether it might be a good drug target.”