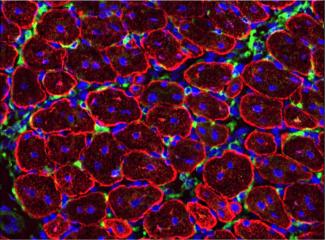 The discovery, published in Immunity, could lead to new ways to treat exercise-related injuries, age-dependent muscle loss, or even muscular dystrophy. There are currently no therapies that boost muscle regeneration.

“Though the immune cells known as macrophages are best known for getting rid of microbes and damaged cells, it’s recently come to light that they also promote tissue repair,” said Nagy. “In this study, we found out how they do that in muscle—by secreting GDF3.”

Macrophages (from the Greek for “big eater”) engulf and digest bacteria, fungi, foreign particles, cellular debris, and cancer cells—anything they don’t recognize as native and healthy. They can exist in multiple states, including a pro-inflammatory form that attracts other immune cells, and one that triggers tissue restoration. Following an injury, macrophages in the bloodstream move into the damaged area and take on the inflammatory state, and as the broken cells are cleared, they switch to the restoration function.

“We were interested in how macrophages shift from their immune role to inducing repair, as well as what signal they use to tell the tissue to rebuild itself,” Nagy explained. “To model tissue damage, we treated muscle with a toxin. We found that injured muscle releases lipids that activate a switch in macrophages called peroxisome proliferator-activated receptor gamma (PPARg).

“In macrophages, PPARg turns on the genetic program for the pro-regenerative state. One of the genes in that program is GDF3, which is secreted from cells, so we thought it might be the repair signal. Our later experiments confirmed that GDF3 helps restore muscle integrity.”

“Now we’re looking at what GDF3 does in models of muscular dystrophy and exercise-induced muscle injury,” Nagy added. “We’re also examining muscle biopsies from patients to see if levels of PPARg and GDF3 are altered. If activating PPARg or adding more GDF3 increases muscle renewal in disease settings, we hope to get the pharmaceutical industry interested in our research.”