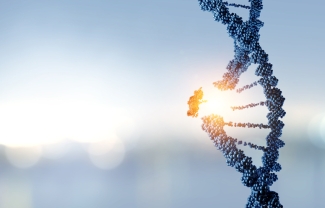 Though DNA is essential for life, it can also wreak havoc on our bodies as we age

DNA is one of the essential building blocks of life, giving our cells instructions for virtually everything they do, but researchers at Sanford Burnham Prebys are investigating what happens to our cells when DNA ends up in places where it shouldn’t normally be, particularly as we age.

The answer – as described in their recent review in the journal Cell—is disease-causing inflammation. And the researchers hope that targeting this rogue DNA will lead to new therapeutic strategies for a range of age-related illnesses, including cancer, diabetes, rheumatoid arthritis, cardiovascular disease and neurodegenerative disorders.

“Age is the primary risk factor for all of these diseases, but they share another risk factor – chronic inflammation,” says first author Karl Miller, Ph.D., a postdoctoral researcher in the lab of Peter Adams Lab, Ph.D., Sanford Burnham Prebys. “We’re trying to understand the underlying processes behind this inflammation so we can potentially treat all these age-related diseases together”

Typically, cells have DNA safely sequestered in their nucleus and in the mitochondria, where the DNA can do its job without interfering with the rest of the cells’ activities. When cells detect DNA in other areas, they unleash a series of biochemical responses designed to protect the cell from invaders. This response is a component of the innate immune system, our body’s first line of defense against infection.

Scientists have known about this system for decades, but until recently it was mostly thought to respond to foreign DNA, such as during a bacterial or viral infection. However, over the last decade, researchers have discovered that pieces of our own DNA, called endogenous cytoplasmic DNA, can escape from the nucleus or mitochondria and trigger this inflammatory response in our own cells, even in the absence of infection. The resulting ‘sterile’ inflammation can accumulate over time, contributing to a range of age-related diseases in all systems of the body.

“Systems like this exist because they're beneficial in youth, but as we age, they break down,” says Miller. “100 years ago, a lot more people died from infectious diseases early in life. Over time, we’ve become better and better at treating these acute infections, and we’re living much longer. It’s in this later period in life that we see chronic diseases emerging that used to be much less common.”

Miller’s review describes four different types of cytoplasmic DNA fragments, classified according to when and how they appear. Some arise from the nucleus during mistakes in cell division. Others emerge because of errors in DNA repair or replication. Some even escape from mitochondria—energy-producing parts of the cell that have their own separate DNA. Others still are of unknown origin.

“They all look similar under a microscope, and they all can cause similar effects. That’s one of the major problems in this field. The benefit of studying how the different types emerge is that it gives us more points to target for therapeutics,” says Miller.

In the Adams Lab, Miller and his colleagues look specifically at cytoplasmic chromatin fragments, one of the four types of cytoplasmic DNA. These fragments appear in the cell when the membrane surrounding the nucleus is weakened by senescence, a cellular stress response. Senescence is also associated with aging.

“We’ve shown how this pathway works in mice, and now we’re actually moving forward with therapeutic applications for humans by doing drug screening to find compounds that can target it,” adds Miller.

And while there is still a lot of work left for the researchers, their progress is encouraging. Adams, senior author on the Cell review, was recently awarded a $13 million grant by the NIH to study the effects of aging, including the role of cytoplasmic DNA, on the progression of liver cancer.

“We like to call what we’re doing here ‘increasing the healthspan’, as opposed to the lifespan,” says Miller. “We’re hoping to maximize the healthy period of people’s lives.”