How tumors shape their environment for their benefit 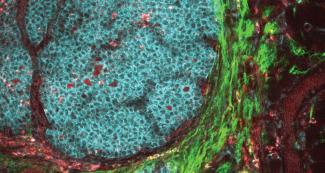 In a new review article published in Current Opinions in Cell Biology, Professors Jorge Moscat, Maria Diaz-Meco and their graduate student Miguel Reina-Campos summarize evidence from their labs and others of how tumor cells play a large part in converting their surroundings to promote cancer progression. The research is important for developing therapies aimed at the area surrounding a tumor—the stroma—to reduce the likelihood of drug resistance, which is the main problem that today’s cancer therapies face.

“Although tumor cells carry mutations that are responsible for their altered behavior, the ability of tumors to grow and metastasize is controlled to a surprising extent by contributions from elements supplied by normal host (patient) cells,” says Diaz-Meco. “Blood vessels that provide nutrients to tumors are a good example of host elements that are critical for tumor growth and metastasis, but other host components such as fat cells, fibroblasts, and immune cells also contribute in important ways to tumor progression. These host components are known collectively as the tumor stroma or tumor microenvironment (TME).”

Different types of host stromal cells in the TME also contribute to a tumor’s ability to use different energy sources, and in turn are themselves influenced by the tumor’s metabolic activity. Reina-Campos points to cancer associated fibroblasts (CAFs) and pancreatic stellate cells (PSCs) as two cell types that interact with pancreatic cancer cells. He explains, “Under nutrient stress, PSCs can use a cell process called autophagy to produce the amino acid alanine, while CAFs produce the amino acid glutamine. Both of these amino acids serve as rich energy sources for the pancreatic tumor cells, which otherwise would have to rely on glucose—a less potent nutrient source.”

In addition to providing nutrients, CAFs and PSCs are also the source of fibrous material known as the extracellular matrix (ECM). The ECM is a potent stimulus for tumor progression and metastasis and is a particularly abundant component of pancreatic tumors. The authors stress that the properties of CAFs and PSCs in the TME are different from those of normal fibroblast and stellate cells, leading to the important concept that the stromal cells are strongly influenced by signals from the tumor cells, and reciprocally (once educated by the tumor cells) can sustain their growth to higher levels of malignancy.

Immune cells are another key TME component whose properties are profoundly influenced by tumor cells, and in turn have a significant ability to promote tumor growth. Moscat explains, “Given that the normal job of immune cells is to seek out and destroy abnormal invaders, the ability of tumors to convert immune cells into tumor promoting agents is really striking. Several different types of immune cells are re-programmed by tumors as a means of suppressing an anti-tumor immune response and generating a tumor promoting response”.

Overall, these studies reveal a number of ways by which tumor cells signal to stromal cells and, conversely, by which stromal cells signal back to tumors. Further defining these tumor-to-stroma and stroma-to-tumor signals can lead to deeper understanding of mechanisms of tumor-stroma crosstalk. Ideally, such mechanisms could then be inhibited by drugs as a means of improving tumor therapy, possibly in combination with other novel forms of cancer therapy that boost immune function.