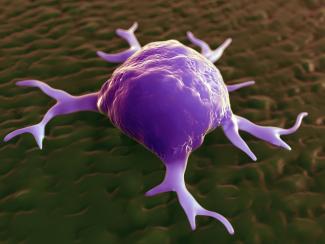 The aggressiveness of a tumor is determined partly by the properties of the actual cancer cells, but also to a surprisingly large degree by the surrounding environment in which the tumor grows, including blood vessels, fat cells, fibroblasts and immune cells.

Of these elements, the roles of immune cells are arguably the most baffling. Immune cells are recruited to tumors to attack and destroy cancer cells, but their properties can change in response to specific signals they receive from the tumor. Macrophages are a good example of immune cells that play complex roles in tumor progression.

Laszlo Nagy, M.D., Ph.D., professor and director of the Genomic Control of Metabolism Program at SBP’s Florida campus, is well-versed in many aspects of macrophage biology. Nagy comments that, “Our lab is studying the way the retinoid X receptor (RXR) controls how macrophages direct the aggressiveness of a tumor—specifically whether it spreads to other parts of the body (metastasizes). Scientists have known for some time that RXR is a regulatory protein found in the cell nucleus, but how it effects tumor metastasis has not been studied.”

Nagy’s lab recently published a study in PNAS that compared RXR macrophage knockout mice with normal mice to assess the how the protein affects the metastasis of subcutaneous tumors. Surprisingly, metastasis was increased in RXR macrophage knockout mice, even though growth of the primary tumors was not affected. Further research showed that the loss of RXR resulted in increased macrophage production of several factors that promote tumor cell colonization of sites in the lungs.

“This is a really tricky concept to grasp,” says Nagy. “The idea being developed by several research groups is that macrophages promote tumor metastasis by producing factors that modify sites in distant organs (known as pre-metastatic niches). This “conditioning” makes these sites more attractive as new homes for migrating tumor cells.

“Our contribution to understanding this phenomenon is discovering the involvement of RXR in suppressing macrophage production of metastasis-enhancing factors. The importance of RXR loss in our mouse model is underscored by finding that macrophage RXR activity is also low in patients with metastatic cancer. Since metastasis is the most dangerous aspect of cancer, we are toying with ideas for how to boost RXR activity in macrophages as a means of suppressing the metastatic phase of the disease.”