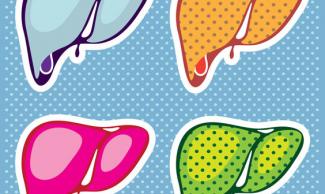 A new study, published in the Journal of Clinical Investigation, suggests that ketogenesis may prevent non-alcoholic fatty liver disease (NAFLD). NAFLD is term used to describe the accumulation of fat in the liver of people who drink little or no alcohol. It affects approximately one billion individuals worldwide, has become a leading cause of cirrhosis, and increases the risk of cardiovascular disease, including heart attacks and stroke.

“To our knowledge, this is the first study that demonstrates a critical role for ketogenesis in normal metabolic functions and in the prevention of metabolic abnormalities of the liver,” said Peter Crawford, M.D., Ph.D., associate director of the Cardiovascular Pathobiology Program at Sanford-Burnham. “The findings are important because now we can consider targeting ketogenesis as an approach to treating NAFLD.”

What is NAFLD? NAFLD is the most common cause of chronic liver disease in the U.S. Although it’s not normal, if it doesn’t lead to inflammation or liver damage it’s not serious. But for some individuals, NAFLD can be more serious, causing liver inflammation and scarring (cirrhosis). In these cases there is a risk of liver failure and liver cancer. Although the cause of NAFLD is not entirely clear, risk factors such as high cholesterol, diabetes, and insulin resistance are associated with the disease. Other potential causes of NAFLD are certain inheritance factors, autoimmune disorders, malnutrition, viral hepatitis, rapid weight loss, and certain medications.

What is ketogenesis? Ketogenesis is the release of ketones by the liver into the bloodstream when fat is broken down for energy. In this process, ketones are a key by-product of that breakdown. They are generated whether the fat is derived from the cheesecake you just ate, or fat you were carrying around your waistline. Ketones in the bloodstream are in turn an excellent energy source for the brain, heart, and skeletal muscle.

Classically, ketogenesis is a major route to dispose of fat in the liver during starvation, type 1 diabetes, or adherence to specific diets such as the Atkins diet. Many will recall the Atkins diet as low-carbohydrate high-fat diet designed to induce rapid weight loss. While unrestrained ketone-body production can cause the metabolic crisis ketoacidosis, most obese and type 2 diabetic humans actually produce ketone bodies at an inappropriately low rate. This could be disadvantageous because the controlled conversion of fat to ketones would be a safe way to dispose of excess calories.

The study “Our study was designed to show that ketogenesis is significant in the normal fed state and may be significant to consider in obesity,” said Crawford. Using mice engineered to lack an enzyme needed to support ketogenesis, the research team was able to show that mice which were fed a normal “chow” diet experienced hyperglycemia and augmented production of a diverse set of lipid metabolites. Ketogenesis-insufficient mice fed a high-fat diet acquired a number of problematic conditions, including liver-cell injury and death, as well as inflammation. The findings indicate that ketogenesis is a critical regulator of hepatic lipid and glucose metabolism, and may modulate NAFLD.

Next steps “It will be important to test the overarching hypothesis that obesity is a state of ketogenic insufficiency—and that approaches to enhance ketogenesis may help treat the metabolic consequences of overnutrition, particularly among those predisposed to develop NAFLD and its consequences,” said Crawford. “While some diets—including the Atkins diet—promote ketogenesis, they are poorly tolerated by most people. Therefore, we are eager to find alternative therapeutic approaches to create safe disposal pathways that avoid our body’s production of injurious metabolites. Additionally, we need to explore the role of ketones themselves in liver metabolism and signaling.”