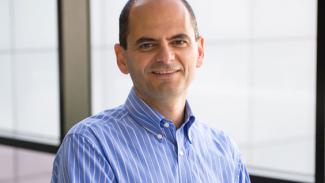 SBP’s newly recruited vice president of Discovery Medicine, Muhammad Al-Hajj, Ph.D., is leading the charge across a bridge connecting our research discoveries with resources to develop new therapies for cancer patients. His job requires him to have one foot in the research labs and one foot out dancing with commercial pharma, biotech, and venture capital companies willing to fund the development of new cancer drugs.

Working with our scientists, Muhammad identifies projects that address significant unmet medical needs that are aligned with the pharmaceutical industry’s investments in the next-generation of cancer drugs. His job is to ensure SBP projects have a high chance of being developed into medicines. He is helping define experiments that prove the robustness of SBP research, and its ability to become an effective treatment for condition(s) where there is a need for better therapeutic options.

“My goal is to establish the reason to believe our scientific discoveries merit investment in the expensive process of drug discovery,” says Al-Hajj.

Muhammad is an experienced “drug hunter” who joined SBP from GlaxoSmithKline, where he was senior director of Biology and Translational Medicine in Oncology. In that role, he was responsible for the research strategy and picking the projects and discoveries that were most likely to lead to high impact cancer drugs, and shepherd them through the process from inception to first-in-humans studies.

Now he is at SBP to do the same.

“The past 20 years of cancer research has produced a steady flow of anticancer drugs—182 FDA approved cancer drugs at last count. Entire new classes of drugs have emerged, some that specifically target molecules required for tumor survival and growth, others that inhibit the growth of new blood vessels that tumors need for oxygen and nutrients. For some cancers, such as melanoma and lung cancer, there are now immunotherapy drugs that extend the survival of patients who previously had no effective treatment options,” he adds.

“With the vast amount of knowledge we’ve accumulated around cancer over the past two decades, we are in very exciting and ripe times of oncology drug discovery.”

“This means that to attract attention, support, or a partner to develop an SBP discovered drug candidate, we need to prove that what we have is not just scientifically interesting, but better than what’s currently available. Better can mean less toxic, have fewer side effects, and most importantly have a much larger impact on patients survival compared to other existing drugs or ones currently in development.”

Muhammad has a pivotal role in fulfilling the Institute’s intention to blend fundamental research and drug discovery to streamline delivering clinical benefits to the millions—perhaps billions—of patients that need better preventions, diagnostics and treatments for their medical conditions.