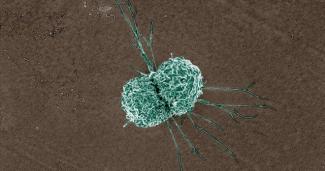 Inflammation is a catch-22: the body needs it to eliminate invasive organisms and foreign irritants, but excessive inflammation can harm healthy cells, contributing to aging and sometimes leading to organ failure and death. A study published in Cell, co-authored by Jorge Moscat, Ph.D., and Maria Diaz-Meco, Ph.D., professors in SBP’s NCI-designated Cancer Center, in collaboration with the laboratory of Michael Karin, Ph.D., at the University of California, San Diego School of Medicine, shows that a protein known as p62 acts as a molecular brake to keep inflammation in check and avoid collateral damage.

In addition to explaining how inflammation is turned off when it’s no longer needed, these findings could have important implications for many age-related diseases, especially in cancer.

Macrophages are cells that play a major role in inflammation — they detect and swallow invading microbes and foreign particles, such as asbestos microfibers. At the same time, activated macrophages release cytokines, small proteins that serve as signals to recruit and activate other immune cells for assistance. To produce and secrete one major inflammatory cytokine, interleukin 1beta (IL-1beta), macrophages employ molecular machines called inflammasomes. One of the most functionally diverse inflammasomes is the NLRP3 inflammasome, which releases IL-1beta when stimulated by toxins and microparticles such as silica, asbestos or cholesterol microcrystals.

That’s a good thing if your body needs to clear out invading particles or microbes, but continuous production of IL-1beta is very dangerous — it can easily lead to an inflammatory chain reaction that results in multi-organ failure, septic shock and death. The body needs a way to turn off IL-1beta production by NLRP3 inflammasomes.

Scientists have suspected for quite some time that damage to mitochondria caused by either genetic or environmental factors is the root cause of many age-related diseases, all of which are associated with chronic, low-grade inflammation. Therefore, p62 — and its part in eliminating damaged mitochondria — could provide a new target for preventing such diseases. Indeed, another protein that collaborates with p62 to eliminate damaged mitochondria is Parkin, which plays a role in a rare form of Parkinson’s disease.

About p62 Moscat and Diaz-Meco discovered p62, and have made seminal contributions to what we know about its role in cancer and metabolism.

“The new finding that p62 levels are increased as a response to foreign particles complements our work in cancer. In tumors, we have shown that fibroblasts can be reprogrammed to produce less p62 and more inflammatory cytokines, events that lead to cancer progression,” said Moscat.

“Here we find a similar process at work in macrophages, implying that reduced p62 in tumor-associated macrophages could also be pro-tumorigenic. We’re exploring this further in our continued collaboration with the Karin lab, added Diaz-Meco.”