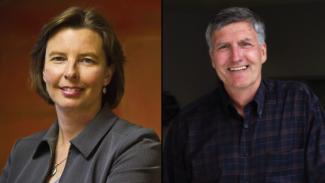 Two Sanford-Burnham professors have been named Charter Fellows of the National Academy of Inventors (NAI): Erkki Ruoslahti, M.D., Ph.D., distinguished professor and former president of Sanford-Burnham, and Kristiina Vuori, M.D., Ph.D., current president of the Institute. Ruoslahti and Vuori are now part of a group of 414 NAI Fellows from more than 150 prestigious research universities, government, and nonprofit research institutions.

Election to the NAI Fellows is a significant professional distinction accorded to academic inventors who have demonstrated a highly prolific spirit of innovation in creating or facilitating outstanding inventions that have made a tangible impact on quality of life, economic development, and the welfare of society.

“I’m honored to be named a Charter Fellow of the NAI,” said Vuori. “I owe a large part of this distinction to the talented scientists, staff, and students I have worked with at Sanford-Burnham over the years.”

Academic inventors are elected by their peers for innovative contributions in areas such as patenting and licensing, innovative discovery and technology, significant impact on society, and support and enhancement of innovation.

An internationally recognized leader in nanomedicine, Ruoslahti's research is focused on directing drugs to sites of disease. His main discovery and invention is the integrin-binding tripeptide motif RGD, a sequence within fibronectin that mediates cell attachment, and is found in numerous other cell-attachment proteins. His recent work has contributed to better tumor imaging and improving drug delivery to specific disease sites.

“It is a great honor to be named a Fellow of the NAI,” said Ruoslahti. “There are so many giants of innovation that have received this distinction, and I’m grateful to be part of that group.”

Ruoslahti holds 314 issued patents and is the founder of the Center for Nanomedicine at UC Santa Barbara, a member of the U.S. National Academy of Sciences and the Institute for Medicine, and a member of the Academy of Arts and Sciences. He is the recipient of the Japan Prize, Gairdner Award, Clowes Award, Pasarow Award, and Jacobaeus Prize, and is a 2012 Thomson Reuters Citation Laureate. He is Knight and Commander of the Orders of the White Rose of Finland and the Lion of Finland.

Vuori joined the faculty of Sanford-Burnham in 1996 and has been president of Sanford-Burnham since 2010. She is also professor and holder of the Pauline and Stanley Presidential Chair, and served as director of Sanford-Burnham’s NCI-designated Cancer Center from 2005 until 2013. Her main research focus is aimed at unraveling the molecular mechanisms of cancer metastasis, particularly the process that makes normal cells adhesion dependent. Normal cells adhere to their microenvironment for survival; if they become detached they will die. Cancer cells are somehow able to detach from their surroundings and move to other tissues in the body and survive and grow. Understanding the mechanisms of cell adhesion opens new approaches to preventing cancer metastasis.

Vuori was selected as a Pew Scholar in 1997 and she is an investigator on a Stand Up to Cancer Dream Team. She serves on the board of directors for the American Association for Cancer Research, California Institute for Regenerative Medicine, California Breast Cancer Research Program, and Florida Inventors Hall of Fame. She is the co-founder of three biotechnology companies.

The NAI Fellows will be inducted by the Deputy U.S. Commissioner for Patent Operations at the United States Patent and Trademark Office (USPTO) during the 4th Annual Conference of the National Academy of Inventors, on March 20, 2015, at the California Institute of Technology in Pasadena.

Academy of Arts and Sciences

Knight and Commander of the Orders of the White Rose

Stand Up To Cancer