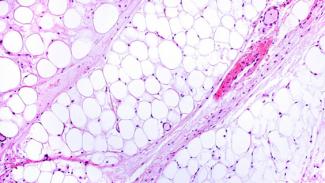 New research from SBP's Sheila Collins, Ph.D., and Richard Pratley, M.D., has revealed an important relationship between proteins secreted by the heart and obesity, glucose intolerance, and insulin resistance. The findings, published in Obesity, offer a new approach to treating metabolic disorders, including type 2 diabetes, by targeting the pathway that controls the proteins’ concentration in the blood.

“Our results illustrate how the regulation of cardiac natriuretic peptides (NPs) is altered in obesity, insulin resistance, and type 2 diabetes,” said study co- author Sheila Collins, Ph.D., professor in the Diabetes and Obesity Research Center at Sanford Burnham Prebys Medical Discovery Institute (SBP). “When we examined fat (adipose) tissue from patients with these metabolic conditions, we found higher levels of the receptor that clears NPs from circulation, suggesting that if we can boost NP levels and/or reduce the level of its clearance receptor we may be able to correct some of these conditions.”

The double life of NP hormones NPs are hormones produced by the heart and are primarily known for their ability to influence blood pressure. When the heart senses elevated pressure, it releases NPs which go to the kidneys, triggering the body to release salt and water from the blood stream to lower blood pressure. NPs prompt the response to blood pressure by signaling through an active receptor (NPRA), and are removed from the blood by a clearance receptor (NPRC). Both receptors contribute to the level of NP activity.

Almost two decades ago, NP receptors were unexpectedly found in human adipose tissue, suggesting that NP levels may play an additional role in metabolism and obesity. Indeed, subsequent studies have shown that circulating NP levels are lower in obese individuals and those with metabolic risk factors, including high glucose levels. More recently, research has shown that obese individuals have higher levels of the clearance receptor in adipose tissue.

Study findings “We examined levels of NPRA and NPRC in adipose and skeletal tissue in individuals with a range of body mass index (BMI) values and insulin sensitivity,” said study co-author Richard Pratley, M.D., director of the Florida Hospital Diabetes Institute and senior scientist at the Florida Hospital-SBP Translational Research Institute for Metabolism and Diabetes (TRI). “We found that higher BMI values are associated with elevated levels of the clearance receptor in adipose tissue.

“We also looked at NP receptor levels in patients with type 2 diabetes after taking pioglitazone, a drug used to improve insulin sensitivity and control blood sugar in patients with type 2 diabetes. Interestingly, we found that these patients had a significant reduction in the level of the clearance receptor in adipose tissue, further reinforcing the link between NPs, insulin resistance, and obesity.

Next steps “Overall, our results suggest that drugs that target the pathway(s) that lead to increased NP levels may be a new way to treat metabolic disorders, including obesity, insulin resistance, and potentially type 2 diabetes.

“Since we already have access to FDA approved drugs to control blood sugar, and we know that these drugs impact NP levels, we may be able to redesign these drugs to specifically target other metabolic conditions including obesity,” said Collins.

“This project is a great example of taking research from bench to beside, and highlights the strength of the partnership between SBP and TRI—a partnership that accelerates the delivery of lab discoveries to the clinic,” added Pratley.

The full text of the paper is available here.

This post was written by Josh Baxt, a freelance science writer.