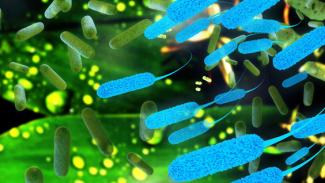 The gut microbiome, the community of bacteria living in the intestines, has an enormous impact on human health, affecting risk for obesity, inflammatory bowel disease (IBD), neurological disorders, and even cancer. Accordingly, there has been an explosion of research in this area in the past ten years, with the long-term goal of developing ways to manipulate the microbiome to promote the survival of bacteria that promote health and/or eliminate those associated with disease.

Developing therapies that alter the gut microbiome requires a detailed understanding of how bacterial species interact with one another and respond to changes in the environment (e.g. changes in a person’s diet). To shed light on the matter, a team of scientists including Andrei Osterman, Ph.D., professor at SBP, and led by Jeffrey I. Gordon, M.D., of Washington University School of Medicine in St. Louis, has developed a new method to identify the genetic factors that allow gut microbes to survive in particular conditions.

How it works: The method, published in Science, was developed by first inoculating the guts of mice with mixes of bacterial strains, each strain carrying a different gene mutation. After feeding the mice various diets, they measured the relative abundance of each strain by counting the number of DNA fragments corresponding to each strain. Comparing the abundance of the final bacterial community to the initial one allows the researchers to generate a “fitness index” for the corresponding mutated gene.

Osterman and his SBP colleague, research associate professor Dmitry Rodionov, Ph.D., performed a critical part of this study. Using information from the microbial genomes, they identified and reconstructed key metabolic pathways that contribute to microbial fitness—a measure of a given strain’s ability to flourish in the gut. Their analysis also points to specific nutrients called prebiotics that can influence the exact type and abundance of bacterial species that colonize the gut.

Why it’s exciting: This method provides a digital readout of the response of a microbial community to a change in the environment, and could be applied not only in the gut, but also to other microbiomes, such as those in the mouth or on the skin.

According to Osterman, “this approach could be used for many purposes including the development of prebiotics (dietary supplements, such as vitamins, amino acids, carbohydrates) and probiotics (“friendly” microbes) for prevention and treatment of disease-related imbalances in the microbial community, IBD and related syndromes. This can be accomplished by combining rapid identification of genes important for survival in diverse microbial communities with genomics-based metabolic reconstruction.

“We are excited about our collaboration with Gordon’s team, and we believe that these and other ongoing collaborative studies have strong translational potential for developing novel diagnostics and therapeutic strategies that modify the gut microbiome.”

The article is available here.