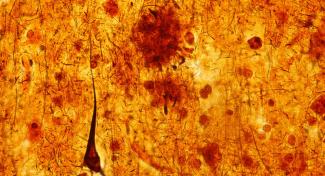 Like weeds taking over a garden, the brains of Alzheimer’s patients become congested with clumps of protein. These clumps arise when a peptide called amyloid beta takes a shape that sticks to other amyloid beta molecules and converts them to the same sticky form, causing a chain reaction. The sticky form of amyloid beta is toxic, so as amyloid plaques accumulate, neuronal connections, and eventually whole neurons, are lost.

Research from the laboratory of Huaxi Xu, Ph.D., professor in the Degenerative Diseases Program, suggests a new possible way to minimize the generation of amyloid beta and slow the advance of this tragic disease. Alzheimer’s, which affects more than 5 million people and is the 6th leading cause of death in the US, destroys patients’ memory and, at later stages, their ability to communicate and understand their surroundings.

“Our results could eventually help us discover therapeutics that address the progression of Alzheimer’s disease,” said Xu. “That would be a big step forward—no such treatment has yet been approved.”

In the new study, published in the Journal of Neuroscience, Timothy Huang, Ph.D., a postdoc in Xu’s lab, examined the function of a receptor called SORLA because variants of the gene encoding it had been linked to early-onset Alzheimer’s. SORLA had also been shown to affect trafficking—transport from one cellular compartment to another—of amyloid beta’s precursor. Amyloid beta is generated only in acidic compartments, where the precursor is cut to yield the toxic form, so trafficking has a big impact on how much amyloid beta is made.

“Modulating trafficking of the amyloid precursor protein through SORLA could be a new way to treat Alzheimer’s,” added Xu. “Other strategies of decreasing levels of amyloid beta, such as inhibiting the enzyme that cuts the precursor, have failed in the clinic, so new approaches are needed.”

Xu and Huang next plan to investigate whether enhancing amyloid precursor trafficking via SORLA reduces loss of neurons and improves cognitive function in an animal model of Alzheimer’s.