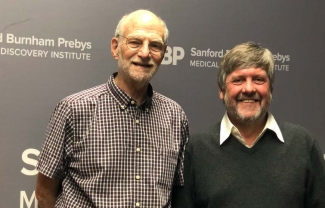 You may want to reconsider swatting that pesky fruit fly: Despite appearances, we share more than half of our genes with the tiny insect. For this reason—and their shorter life span and simpler genome—researchers often use the flies as models for human health and disease.

Nobel laureate Michael Rosbash, Ph.D., is one such scientist. A self-described “fly chauvinist,” this month he visited SBP to present his latest research on the circadian rhythm of fruit flies. The event quickly became standing room only.

Rosbash received the 2017 Nobel Prize in Physiology or Medicine, along with Jeffrey Hall and Michael Young, for their work uncovering the molecular timekeepers behind circadian rhythm. Their work was conducted in fruit flies, but has since unlocked new discoveries in animals and plants.

Rolf Bodmer, Ph.D. (pictured left), who introduced Rosbash (pictured right), is using fruit flies to uncover how our heart develops and ages, with a particular focus on a heart rhythm disorder called AFib. Nearly 10 percent of people over the age of 65 develop the condition, a leading cause of stroke, but we don’t know its cause, and there is no cure. By studying AFib in fruit flies, Bodmer and his team, which includes a cardiologist at Scripps Clinic, are hoping to learn the cause of the disorder and find effective treatment(s).

While he has all the reason in the world to have an ego, Rosbash remains humble and down-to-earth. He ended his presentation by thanking his lab, without whom he would “not have a job and such prizes.”