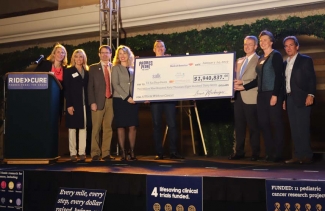 This year’s event—which invited participates to cycle, spin, run or walk—had more than 2,500 participants, an increase of 35 percent. Total fundraising grew by 22 percent. SBP has participated in the event since its inception; and this year our team of more than 60 scientists, staff and SBP supporters raised more than $30,000 for the cause. Since the inaugural ride six years ago, PPTC has raised more than $10 million.

Nearly 300 of the event’s participants, including Tony Gwynn Jr., Pedal founders Bill and Amy Koman, San Diego business leaders, and top donors and fundraisers, gathered at the Del Mar racetrack to witness the funding reveal and check presentation in person.

Gwynn shared a moving story about his father’s battle with salivary cancer, a journey he still finds difficult to recount. “If he saw this progress, he would be smiling today,” he said.

A full 100 percent of the proceeds fund collaborative research taking place at the four San Diego research institutes. Past PPTC grants have accelerated SBP’s research into cancers of the breast, skin, brain, colon, pancreas and more. This year’s grant announcement will be revealed in the spring.

In the meantime, make sure to mark your calendars for the 2019 event, which will take place on Saturday, November 16. Registration will open in mid-April.