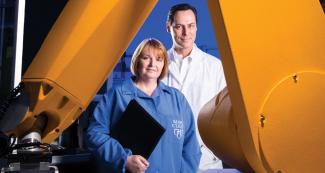 Medical discoveries may languish in laboratories for years without the necessary tools and means to drive findings further toward the development of novel therapeutics. This could have been the case for Dr. Pamela McLean, a Parkinson’s disease expert at the Mayo Clinic in Jacksonville, Fla., had a collaboration with SBP’s drug discovery team in Lake Nona not emerged.

McLean’s deep clinical experience and unique insights into the molecular basis of the disease, combined with SBP’s screening technology and drug discovery expertise, produced promising findings and attracted a significant grant from The Michael J. Fox Foundation (MJFF). Just recently, the researchers were awarded a special MJFF bridge grant to ensure that the science continues to move forward.

McLean studies the role of alpha-synuclein, a protein that misfolds and aggregates in the brain regions that are critically involved in Parkinson’s disease. She brought her cell-based models of alpha-synuclein protein “clumping” to SBP where the drug discovery team screened through 800,000 chemical compounds for substances that were capable of removing the abnormal protein and protecting the cells. Results from the initial study identified eight compounds as potential inhibitors of alpha-synuclein aggregation.

“Our current investigation will enhance the effectiveness of the drug candidates that we previously identified and advance them to pre-clinical development on the road to patient treatment,” said Dr. Layton Smith, director of SBP at Lake Nona Drug Discovery.

During this phase, chemistry teams will validate and refine the drug candidates’ biological activities. The process will likely eliminate some candidates in a testing funnel designed to narrow the compounds to those that exhibit the desired properties, such as inhibiting protein aggregation in the brain. Concurrently, McLean will explore the drug candidates’ mechanism of action to understand if the compounds work by blocking aggregation, enhancing removal of the clumps or by some other means. New therapies are critically needed to treat the more than 1 million Americans afflicted with Parkinson’s disease. Current medicines treat symptoms but do not reverse the effects of the disease.