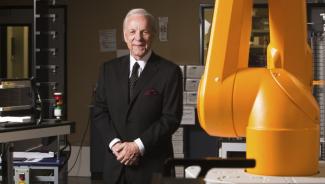 Conrad Prebys, a longtime supporter of the Institute and namesake in honor of his landmark gift in 2015, died recently following treatment for cancer. Prebys strongly believed in giving back and sharing the fruits of his success with others. The staff, scientists, and leadership of Sanford Burnham Prebys Medical Discovery Institute (SBP) are grateful for his confidence in our research and privileged to have been a recipient of his remarkable generosity.

At the renaming of the Institute, Prebys said, “I’ve been involved with the excellent researchers at the Institute for many, many years. They’re the best there is, and that excites me. If, through my support, I can shorten people’s suffering, or extend their quality of life, that would give me unlimited pleasure and joy.”

In addition to the 2015 donation, Prebys gave a substantial sum to establish the Conrad Prebys Center for Chemical Genomics in 2009, as well as regular gifts supporting the Institute’s research in the intervening years.

Recently named one of the 25 most generous people in the US, Prebys built his wealth through construction and property ownership after moving to San Diego from Indiana in 1965.

The Institute has lost a friend and supporter who will be missed, but his commitment to medical discoveries will have an impact on human health for generations to come.

Our Supporters and Gifts