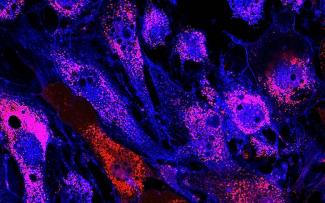 When you think of stem cells, you probably think of healing and regeneration—cells that can replace tissue lost to disease or injury. But tumors also arise from stem cells—a specific kind called cancer stem cells. Because these cells can divide indefinitely, while other cancer cells’ proliferation is more limited, therapies that get rid of them would eventually stop a tumor from growing, and from ever coming back.

Researchers in the laboratory of Dieter Wolf, M.D., professor in the NCI-Designated Cancer Center, may have found a new way to do this, though in a roundabout way. While examining the function of two proteins found at high levels in tumors, they discovered that these factors are required for a type of metabolism that’s essential for cancer stem cells to survive.

“Our findings suggest that these components, eukaryotic initiation factors (eIFs) 3d and 3e, are novel targets for eliminating cancer stem cells,” said Wolf, senior author of the study, which was published in Cell Reports. “If we could find a way to turn these factors off, we could starve cancer stem cells.”

eIF3d and eIF3e are part of the complex that initiates protein synthesis, also called translation. Specifically, they and other eIFs help bring the ribosome, which builds proteins by linking amino acids one by one, to messenger RNA, the molecules that carry the code the ribosome reads, specifying which amino acid should be added next.

Wolf’s team was interested in whether overproduction of eIF3d and eIF3e promotes cancer progression. To determine their function, they compared the amounts of all proteins made in cells lacking these factors to those in normal cells. A difference that stood out was in the levels of the protein complexes required to produce ATP, the cell’s energy currency, in mitochondria—eIF3d/e-deficient cells produced far lower amounts than normal.

“Our results are somewhat surprising because eIF3 has long been thought to control the synthesis of all proteins. Instead, our data suggest that some parts of eIF3 selectively recruit certain mRNAs.”

“We’re now examining how eIF3d/e affects cancer metabolism overall to see if these factors might be relevant to more than just cancer stem cells,” added Wolf. “Also, as a step towards advancing this research to the clinic, we’re designing screens to identify small molecule inhibitors of eIF3d/e.”