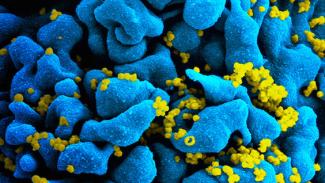 Researchers at Sanford Burnham Prebys Medical Discovery Institute (SBP) have identified a new class of drugs that may be used to purge pockets of dormant HIV from a patient’s body, eliminating the virus once and for all. Fortuitously, these agents are already being explored in clinical trials for treating cancer, which could speed up the route to approval for treating HIV.

Antiretroviral therapies have made it possible for people to live with AIDS for decades. However, small reservoirs of a patient’s cells hide the virus. That is, HIV’s genes live in the cells, but its genetic code is never read to make protein, and so the virus goes undetected by the immune system.

“If you take people off the antiretroviral therapies, some of these dormant cells reawaken to make more virus,” said lead author Lars Pache, Ph.D., a postdoctoral fellow in the lab of Sumit Chanda, Ph.D., director of the Immunity and Pathogenesis Program at SBP. “The key for a cure for HIV is to purge these cells that have dormant HIV.”

Reactivating latent HIV-infected cells so that they can be killed off once and for all is called ‘shock and kill.' The approach has remained elusive so far, because drugs that reawaken the virus could also trigger massive immune system activation, which itself could be deadly, Chanda said.

The new study, published September 9 in the journal Cell Host & Microbe, “uses a class of drug called Smac mimetics to tap into a cell pathway that can be used to wake up the virus but, based on clinical studies and our data, doesn’t appear to activate the immune system,” Chanda added.

The study started with a broad search of genes within the host cells that help keep the virus silent. Chanda’s group identified 651 genes. They then created batches of cells in which each one of those genes was silenced, and they measured how much HIV the cells produced after they were exposed to the virus.

The scientists whittled the list of candidate genes down to 139, to 24, and then 12 using increasingly stringent criteria. The absence of one gene in particular, BIRC2, boosted the activity of HIV. Even better, Smac mimetics—already proven safe in early-stage clinical trials for cancer—works by inhibiting BIRC2 and related molecules.

“These experiments led us to develop a strategy of using Smac mimetics to reawaken dormant HIV so that we could then kill it with anti-viral therapy,” said Chanda.

Chanda’s colleague at SBP, Nicholas Cosford, Ph.D., professor in the Cell Death and Survival Networks Program, had recently described a potent BIRC2 inhibitor, SBI-0637142. “This drug is about 10-100 times more potent than the small molecules currently in clinic development, making it a promising candidate to tackle HIV latency,” says Chanda.

Part of the reason that HIV’s genes stay hidden in its host is that they cover themselves with tightly wound DNA. A class of drugs called histone deacetylase inhibitors, which unfurls the DNA, is used to treat a variety of conditions. Although most of these inhibitors haven’t worked well on their own to reactivate latent HIV, they might work well with Smac mimetics including SBI-0637142, Chanda’s group reasoned.

The key question was whether they could reactivate the virus in cells from HIV-infected patients undergoing antiretroviral therapy. They combined SBI-0637142 with a histone deacetylase inhibitor (panobinostat) and saw signs that the virus had reawakened without triggering immune cell death.

“We anticipated that we would see a synergy because the drugs work along parallel pathways. What we didn’t expect was the level of activation—the potency and efficacy with which we were able to reverse latency in patient samples,” Chanda said.

They saw similar results in patient cells treated with a combination of LCL161—a Smac mimetic that is already in phase 1 and 2 trials for treating cancer—and panobinostat. “This is a one-two punch for HIV,” said Chanda, adding that ultimately, a cocktail of drugs will be necessary to cure HIV.

The scientists hope to partner with a pharmaceutical company to develop these molecules for testing in animal models of HIV and then move them into the clinic if they meet the safety and efficacy criteria.

This post was written by Kelly Chi, a freelance science writer.