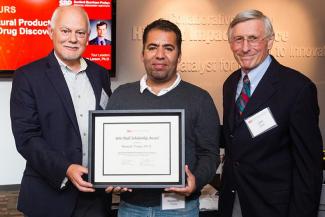 In a touching, heartfelt ceremony, Dr. Jim Dudl presented the Eric Dudl Scholarship Award to this year’s postdoctoral winner Roberto Tinoco. Dr. Jim Dudl is the father of Eric Dudl, a postdoctoral researcher who worked at Sanford Burnham Prebys Medical Discovery Institute up to four days before his death from lung cancer. Eric Dudl was only 33 years old.

Dr. Dudl told the audience how his son thought SBP was the best place on earth to work and a “place you don’t find very often.” Eric didn’t want to stop work early, even as the cancer took an excruciating toll on his body. “His mission was to give back to the world,” said Dr. Dudl. Eric gave what little life’s savings he had to give back to the Institute and help other postdocs launch their future careers.

“I feel very fortunate and honored to win the award in memory of Eric Dudl. I want to carry the torch for him in finding new immunotherapies,” said Roberto Tinoco, recipient of this year’s Eric Dudl Award. Tinoco himself lost both parents to cancer so his drive to improve patient treatments is not just professional. It’s personal.

Winning the Eric Dudl Award has been a significant boost for him, says Tinoco. In his sixth year as a postdoctoral researcher in the laboratory of Linda Bradley, Ph.D. Tinoco is ready to start his own laboratory. With the funds from the award, Tinoco said he “learned about the latest developments in immunotherapies” at a conference in New York City to help him develop his own ideas even further.

In the past year, he’s published as first author and is working in collaboration with Eli Lilly pharmaceutical company. His plans for research in his own lab involve “continuing to look at the mechanisms of T cell dysfunction in human and mice. We looked at melanoma in the past but I’m interested in expanding to other cancers.”

Before the Cancer Center Open House tours began, Guy Salvesen, Ph.D., who runs a SBP laboratory and is also dean of SBP’s Graduate School of Biomedical Sciences, introduced the award and helped present the award to Tinoco.

Dr. Dudl poignantly told the audience that Eric “got his wish of giving back.”