Sanford Burnham Prebys and Roche fight back against antibiotic resistance 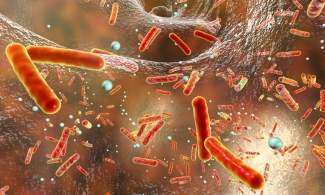 Their new results, published in the journal mBio, are one piece of a long-standing collaboration between the two organizations, the goal of which is to mitigate the growing threat of antibiotic resistance by developing more “irresistible” drugs and by helping improve antibiotic prescribing practices.

“The emergence of antibiotic resistance is inevitable for any single drug, new or old. It’s only a question of time,” says senior author Andrei Osterman, Ph.D., a professor at Sanford Burnham Prebys. “But the precise time is different for every drug and every microbe, so studying when and how resistance to antibiotics evolves gives us powerful information for improving antibiotic treatment.”

When a patient is treated with antibiotics, most individual bacteria die, but a few cells will survive, usually as a lucky consequence of a random genetic mutation. These survivors go on to multiply into a whole new population of antibiotic-resistant bacteria.

“The development of antibiotic resistance is a strictly Darwinian process, very similar to evolution in larger organisms,” says Osterman. “The difference is that in bacteria, it happens much more rapidly, which makes antibiotic resistance one of the most pressing challenges facing medicine today.”

Although the speed at which evolution occurs in bacteria makes antibiotic resistance a threat, the researchers were also able to take advantage of this speed to study its development. The team cultured three species of bacteria in a morbidostat, a device that allows bacteria to grow continuously over multiple generations while being dosed with antibiotics. Although theirs was not the first morbidostat device, the team designed a new, more effective version of the system for their experiments.

“It’s like an evolution machine, letting us watch the development of antibiotic resistance in real time and in an environment that more accurately models what happens to bacteria in a clinical setting than other approaches,” says Osterman. “This gives us a clearer and more comprehensive view of resistance than we’ve ever had before.”

By observing the bacteria’s evolution in the morbidostat and sequencing their genomes as they evolved, the researchers found that all three species had a similar pattern of resistance development. However, they also found subtle differences in the ways certain genes were expressed, particularly those that help bacteria remove toxins, a critical process in developing resistance.

“It’s like three remakes of the same movie by three different directors, and their comparison gives us a wealth of information to guide the development and use of antibiotics,” says Osterman.

Understanding resistance is critical to reducing its harm

Working with Roche, the team has completed similar studies on several other classes of antibiotic drugs, which is helping Roche identify promising candidates for antibiotics that are less prone to resistance.

And because antibiotic resistance is often not assessed in drug candidates until years into the process, using resistance to screen for drug candidates this way could save the biomedical industry millions of dollars and help patients benefit from effective drugs sooner.

“A completely ‘irresistible’ drug is a holy grail, something we can never truly achieve,” says Osterman. “But some drugs are less resistible than others, and our methods allow us to figure out which is which in a systematic way.”

In addition to helping develop new drugs, the researchers claim that their findings are easily translatable to the clinic, where doctors can use detailed knowledge of resistance to select optimal drug combinations with less likelihood of failure due to resistance.

“We are moving away from trial-and-error approaches in medicine and moving toward being able to predict exactly what drugs will work best for each patient,” says Osterman. “It is going to take time, effort and money to make this happen, but it will all be worth it if we’re able to alleviate the threat of antibiotic resistance and help save lives, which I’m confident can be done.”