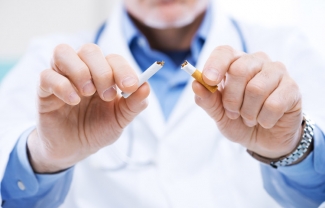 A drug discovered in the lab of Nicholas Cosford, Ph.D., professor and deputy director of the NCI-designated Cancer Center at Sanford Burnham Prebys, has entered a Phase 1 clinical study.

The compound, SBP-9330, targets a neuronal signaling pathway underlying addictive behaviors and would be a first-in-class oral therapeutic to help people quit smoking.

The study is being funded by the National Institute on Drug Abuse (NIDA) at the National Institutes of Health (NIH) through a grant awarded to Sanford Burnham Prebys, the Department of Psychiatry, University of California San Diego, School of Medicine, and Camino Pharma, LLC, who will oversee activities related to the Phase 1 study.

“Smoking continues to be the leading cause of preventable death in the US. Nearly 70% of adult smokers try to quit smoking, but only succeed less than 30% of the time, and often relapse after quitting,” says Cosford, who is also co-founder of Camino Pharma. “It has been 15 years since the U.S. Food and Drug Administration (FDA) last approved a therapeutic for this indication. We hope that SBP-9330 ultimately becomes a viable therapeutic option for smokers to quit for good.”

As a novel selective positive allosteric modulator of the metabotropic glutamate receptor 2 (mGlu2), SBP-9330 is designed to reduce levels of glutamate, a neurotransmitter linked to addiction and relapse behavior. Preclinical studies of SBP-9330, supported by a previous NIDA grant awarded to the same three institutions, demonstrated that the drug candidate reduces nicotine self-administration in animal models and is safe and well tolerated in preclinical safety and toxicology studies.

“We are excited to initiate the first-in-human study of SBP-9330 and are grateful for the investment the NIDA has made in the treatment of tobacco use disorder,” says Gonul Velicelebi, Ph.D., CEO and co-founder of Camino Pharma. “In the future, we also hope to broaden the indication of SBP-9330 to other types of addiction, such as cocaine, opioid, or methamphetamine use disorders. This is supported by preclinical data in other models of substance abuse as well as the mechanism of action of SBP-9330."

The randomized, placebo-controlled, double-blind, single-ascending and multiple-ascending dose study is being conducted at a single site in the United States under an Investigational New Drug (IND) application recently allowed by the FDA and will enroll up to 80 healthy volunteers through multiple cohorts (https://clinicaltrials.gov/ct2/show/NCT04948827). The goal of the study is to determine the safety, tolerability and pharmacokinetic profile of SBP-9330 in humans and to determine a safe dose range for further clinical development SBP-9330 for the treatment of people with tobacco use disorder.

“We are excited about collaborating in the development of SBP-9330 to treat tobacco use disorder. Each year in the United States, roughly half a million people die from tobacco-related diseases. It is critical to have more therapeutic options if we want to reduce the number of deaths and illnesses related to smoking,” says Robert Anthenelli, M.D., UC San Diego professor of psychiatry and one of the co-principal investigators on the NIDA project.