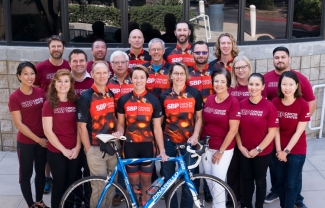 Nearly everyone knows someone who has been affected by cancer: One in three Americans will be diagnosed in their lifetime. In San Diego, it’s the number one cause of death.

Launched in 2013, the annual fundraiser has since expanded from a cycling-only event to include a 5K run or walk and stationary spin classes. To date, the event has raised more than $10 million to accelerate cancer cures, with 100% of the proceeds funding collaborative research taking place at four San Diego research institutes, including Sanford Burnham Prebys. Past PPTC grants have advanced our Institute’s research into cancers of the breast, skin, brain, colon, pancreas and more.

This year’s event had an ambitious goal of raising $3.3 million. Fundraising will continue until December 7, 2019; the final amount raised will be revealed on January 30, 2020, at a special check-presentation ceremony.

Want to help Padres Pedal the Cause meet its fundraising goal? Donate today.