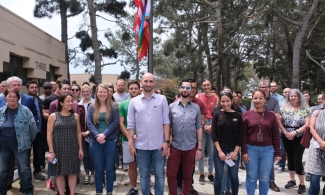 The ceremony featured speakers from the Institute and was the first formal LGTBQ+ Pride event to be held on campus.

Scientists and staff from across the Institute gathered to celebrate LGBTQ+ Pride at Sanford Burnham Prebys by attending a Pride flag raising ceremony. Our employees spoke to the importance of inclusion in STEM, and the Pride flag was hoisted from the main campus flagpole.

“By supporting LGBTQ+ and other underrepresented groups, institutions signal that they are open to different viewpoints and people, which is crucial,” says Luca Caputo, Ph.D., a postdoctoral fellow in the lab of Pier Lorenzo Puri, M.D. Caputo has been heavily involved in the Institute’s DEI initiatives, and he is also a co-founder of the Queer Science Society, an organization that raises awareness on issues facing LGBTQ+ scholars in STEM.

“Having a celebration such as the Pride flag ceremony here at Sanford Burnham Prebys helps us support LGBTQ+ scientists at the Institute and beyond,” he adds.

After an introduction by Alessandra Sacco, Ph.D., Caputo spoke about the importance of Pride Month and highlighted the need to promote inclusion and diversity in STEM.

“This is just the first step in the right direction of making Sanford Burnham Prebys a truly inclusive campus and Institute,” he said during his remarks. “I and others on campus are going to hold [our Institute] accountable for numerous steps that are necessary to create a real welcoming and supportive environment, not just for queer scholars but for all underrepresented groups."

In addition to these comments, Caputo shared his personal story as an LGBTQ+ scientist and briefly described the “invisible minority” phenomenon for LGBTQ+ scientists. This term refers to the fact that the LGBTQ+ community is often excluded from studies aimed at understanding diversity in STEM.

“The lack of inclusion in demographics has a profound effect on efforts to increase equity and inclusion for the LGBTQ+ community” says Caputo. “Many undergraduates do not know or have access to a single LGBTQ+ scientist.”

After Luca told his story, Professor Hudson Freeze, Ph.D. spoke to the spirit of inclusion that Sanford Burnham Prebys was founded on. He also mused on the future of inclusion at the Institute.

“This [flag raising] is a good start, but it’s not the end – We have to keep this going,” Freeze said during his remarks.

And while this was the first formal Pride event to be held at Sanford Burnham Prebys, it certainly will not be the last.

“Pride means freedom. Pride means hope that future generations of LGBTQ+ people won’t have any doubts about themselves and their worthiness to be in STEM,” says Caputo. “Supporting LGBTQ scientist is simply the right thing to do.”