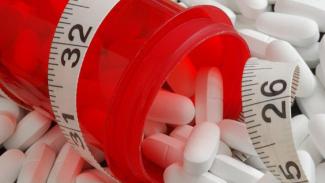 In a new pilot study led by principal investigator Steven R. Smith, M.D., the weight-loss drug lorcaserin (LOR), was tested in combination with the drug phentermine (phen) to compare safety and weight loss to administration of LOR alone. The results showed that the combination of drugs more than doubled weight loss achieved compared to LOR alone, and that treatment with LOR plus phen was not associated with any additional adverse events compared either drug alone.

“The results of this study are promising because there is a tremendous need for new, safe, and effective weight-loss medications for people at risk of developing health complications due to obesity,” said Smith, scientific director of the Florida Hospital - Sanford-Burnham Translational Research Institute for Metabolism and Diabetes and professor in the Metabolic Disease Program at Sanford-Burnham. “Losing weight is hard and sometimes lifestyle interventions are not enough to reverse the deleterious effects of obesity. Medications that turn down appetite and increase the activity of satiety centers in the brain are complementary to lifestyle changes—and medications can increase adherence to lifestyle recommendations.”

The multi-center study enrolled 238 patients with a body mass index (BMI) greater than 30, or greater than 27 with a co-morbidity other than type 2 diabetes—such as hypertension, dyslipidemia, or sleep apnea. Subjects were randomized in the 12-week study and received either LOR alone, or LOR with phen. Thirty-three percent of patients receiving LOR achieved a weight loss greater than or equal to 5 percent of their body weight, compared to 84 percent of patients that received LOR plus twice-daily administration of phen.

“The secondary endpoint finding that the combination of LOR plus phen achieves significantly greater weight loss will support future studies aimed to confirm the findings in larger populations, and establish the clinical parameters for usage beyond 12 weeks.”

Phen was once used as part of the drug combination fenfluramine/phentermine (fen-phen), but was withdrawn from the market in 1997 when it was found to be potentially fatal due to heart-valve problems. These adverse events occurred because of fenfluramine interactions with other types of serotonin receptors on heart valves. Phentermine on its own is not associated with harmful health effects.

"The ‘old’ types of serotonin drugs are ‘dirty’ and activate many receptors, including the serotonin receptors on heart valves. That was the problem with fen-phen,” said Smith. “Technology has advanced our ability to be more selective in the drug candidates we develop. Increased selectivity reduces the potential for harmful side effects, and expands the opportunity to develop safe, effective treatments.”

LOR is an FDA-approved drug marketed in the U.S. under the trade name Belviq™ by Eisai and manufactured by Arena Pharmaceuticals. The study was sponsored by both companies.

Dr. Smith also serves as senior vice president and chief medical officer of Florida Hospital, and scientific director of the Translational Research Institute for Metabolism and Disease (TRI-MD). The TRI-MD is a joint venture between Florida Hospital and Sanford-Burnham that is dedicated to the study of obesity, metabolism, diabetes, and the metabolic origins of cardiovascular disease.

In early 2020, the FDA requested that Belviq be withdrawn from the market.