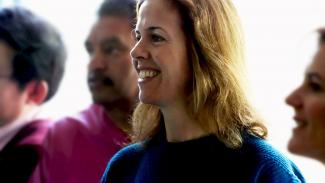 Francesca Marassi, Ph.D., professor in SBP’s NCI-designated Cancer Center, has been awarded an Outstanding Investigator Award from the National Institute of General Medical Sciences (NIGMS). The $4 million grant is to study how proteins on the surface of pathogens promote virulence by mediating the first-line interactions with human host cells. The project has important implications for biology and medicine.

“Our initial focus is on a protein called Ail (attachment invasion locus) that is expressed on the outer membrane of Yersinia pestis, the causative agent of plague,” said Marassi. “The Y. pestis bacterium is highly pathogenic, spreads rapidly and causes an extremely high rate of mortality. Ail is critical for suppressing the human immune defenses and for promoting bacterial invasion”

Although it is sensitive to some antibiotics, the potential use of Y. pestis as a biological weapon has led to its classification as a Tier 1 Biothreat Agent - a designation used by the U.S. Department of Health and Human Services to identify pathogens and toxins that can be misused to threaten public health or national security.

“The emerging threat of bacterial drug resistance makes our work particularly important,” added Marassi. “We will be using a technology called NMR (nuclear magnetic resonance) to determine the three-dimensional structure of Ail and examine how it associates with its human protein partners. Visualizing these biomolecular complexes helps us understand how pathogens engage their human host, and advances our ability to design effective drugs and vaccines for bacteria and viruses,” added Marassi.