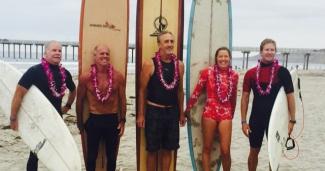 Did you know that SBP has a surfing team?  Not only do we have a team, but we have a winning team!  Last weekend, Carl Ware, full-time immunologist and part-time surfer, led the SBP team to victory in the Luau and Legends of Surfing Invitational, a contest held in San Diego that raises funds for the UC San Diego Moores Cancer Center.

For the past 22 years the Luau has attracted some of the most respected men and women in surfing history, along with business leaders, scientists, local politicians and national celebrities, all surfing for a cure. The event has raised more than $7 million for cancer research, improved public awareness of the need for better therapies, and always creates unlimited fun for participants and spectators.

“The Luau and Legends Invitational hits both of my passions, science and surfing.  I’ve been surfing in the event for about 10 years,” said Ware. “Raising money for cancer research is great, but I especially treasure surfing with my son and teammates.”

Each competitive team consists of four members and a surf legend. This year the SBP team included Carl Ware, his son Austin, Jeff Timpson, Loni Christiansen, and surf legend Tom Ortner. Austin lives in Australia and is a sports psychologist and surf coach.  Jeff, who does a remarkable head stand on his board, and Loni, who surfs a stylish switch foot, are local sufers that frequent Swami’s break.  Ortner is a living legend from La Jolla who surfed professionally in the 1970’s.

The SBP team raised an impressive $15,000 for the Cancer Center.

Other notable surf stars that participated in the event were Robert August and Mike Hynson. Stars of the classic surf film Endless Summer, Pat O’Connell, Robert “Wingnut” Weaver, and Rob Machado and many others.

“We won for cancer research, and now we are planning a world tour to help defeat cancer,” added Ware.

Carl Ware, Ph.D., is the director of SBP’s Infectious and Inflammatory Disease Center.