Slowing down the “aging clock” 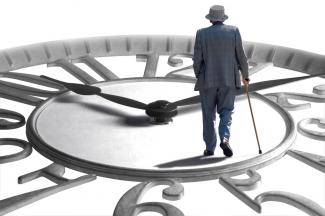 What if it were possible to slow down the clock on aging? There may indeed be such a clock in all your cells. New research from the laboratory of Peter Adams, Ph.D., professor at Sanford Burnham Prebys Medical Discovery Institute (SBP), provides further evidence that the epigenome—the pattern of chemical tags across our chromosomes that help determine which genes can be read—is the key to aging.

“We found that conditions or treatments that extend lifespan make the epigenome of an old animal look like that of a much younger one,” says Adams, senior author of one of a pair of studies in Genome Biology. “In other words, the ‘epigenetic clock’ can be slowed. That suggests that to help people stay healthy longer and lower their risk of diseases like Alzheimer’s, cancer, and atherosclerosis, we should find molecules that do the same thing.”

Adams’ studies, performed in collaboration with the lab of Trey Ideker, Ph.D., professor at UC San Diego, build on previous findings in humans. Ideker and subsequently other teams of scientists had identified the genomic sites at which the presence or absence of a chemical tag correlates with age, and created an algorithm to tell a person’s age within two or three years by analyzing all those sites. This epigenetic clock speeds up in people with diseases that lead to earlier onset of aging-associated problems, such as obesity or HIV infection, or who have survived severe psychological stress in childhood.

Adams’ and Ideker’s teams showed that longevity-conferring interventions have the opposite effect—they put a brake on age-associated epigenetic changes. To make that discovery, they compared the epigenomes of normal mice to those of mice in which aging was slowed by three strategies that are all well known to extend the mouse lifespan: a longevity mutation (Prop1df/df, which also causes dwarfism), caloric restriction (reducing dietary intake significantly, but not enough to harm the mice), and rapamycin, a drug with multiple effects on metabolism and the immune system.

“To show that longer life correlates with slower epigenetic aging, we first had to delineate the mouse epigenetic clock,” adds Adams. “That provides us with a very useful tool. Now we can do experiments to find out whether epigenetic changes actually drive aging. For example, we can compare animals with slow and fast epigenetic clocks to see if the ones that age slower stay healthier as they age.

“And we can investigate how the epigenetic clock “ticks”—what cellular processes cause these changes over time? The answers to that question could identify targets for anti-aging medicines.”