“Survivin” as a new target to treat brain cancer 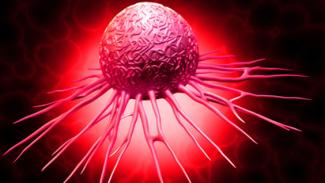 Medulloblastoma (MB) is the most common malignant brain cancer in children. Children diagnosed with the disease undergo intense therapy, including surgery, radiation, and high-dose chemotherapy. Although current treatment regimens have improved 5-year survival rates, almost a third of MB patients still die from their disease, and children who survive suffer long-term side effects that affect their quality of life.

Robert Wechsler-Reya, Ph.D., director of the Tumor Initiation and Maintenance Program at Sanford-Burnham, led a team of researchers dedicated to finding new, safer, and more-effective treatments for medulloblastoma. In a recent collaborative study published in Oncogene, the research team found that inhibiting a protein called “survivin” blocks medulloblastoma growth in vitro and in vivo. The results indicate that small molecules targeting survivin could represent promising therapeutics to treat this devastating disease.

“We found that survivin is expressed in MB tumor cells but not in normal brain cells, and plays an important role in tumor growth and maintenance,” said Sonja Brun, Ph.D., postdoctoral fellow in the Wechsler-Reya lab and lead author of the study. “This fact may explain why we found that survivin inhibitors induce death of MB tumor cells but are not toxic to normal brain neurons. This makes survivin a very appealing therapeutic target to treat MB.”

The study specifically focused on a type of MB caused by aberrant activation of the sonic hedgehog pathway (SHH), a signaling pathway that drives proliferation of specific neuron precursor cells. SHH-driven MB tumors have an intermediate prognosis—not the best but not the worst—with an overall survival rate of approximately 60 to 80 percent. Using a combination of mouse models of SHH-driven MB and human cells from SHH-driven MB tumors, the research team showed that a small-molecule inhibitor was able to impair the proliferation and survival of cancer cells by blocking the activity of survivin. Not only did the inhibitor halt cancer-cell growth, it actually promoted cell death in the SHH-MB tumor cells.

Survivin Survivin is a protein that regulates cell-cycle progression and cell survival. Previous studies of survivin have shown that high levels of the protein are correlated with poor clinical outcome in non-small cell lung cancer, breast cancer, leukemia, neuroblastoma, and glioma. Because of survivin’s association with cancer, a number of clinical trials using inhibitors of the protein are already under way for several cancer types. “Our study highlights the role of survivin in SHH-driven MB—an association that until now has not been studied extensively,” said Wechsler-Reya. “Interestingly, we found that inhibiting survivin enhanced the effects of radiation. This raises the possibility that inhibitors may allow a reduction in the dose of radiation used for therapy, reducing treatment-related side effects and improving the long-term quality of life.”

“Because the survivin inhibitors currently available are not effectively transported to the brain, we are now working to improve the method of delivery by loading the drug into nanoparticle carriers. Nanoparticles may help increase the drug concentration inside the tumor, so that it is able to kill tumor cells effectively,” added Wechsler-Reya.